In association with 4 Breams Buildings 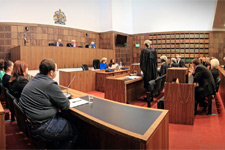 The Hertfordshire Law School is the founder, organiser and host of the first and only, national undergraduate mock trial competition. The National Criminal Advocacy Competition involves students undertaking a series of mock trials and pre-trial applications such as those relating to bail and character.

The aim is to introduce undergraduates and GDL students to the more day-to-day advocacy activities and skills. It allows participants the chance to learn and develop different practical skills to those that can be obtained through mooting alone, and which will be common from the outset of your future legal career.

Competitors will undertake mock trials where teams will be conducting examination-in-chief and cross-examination of a witness, as well as delivering opening and closing speeches.

Teams will participate in 2 matches against the same opponent, 1 at home and 1 away. Each match will have a different set of case papers and will each consist of 2 pre-trial applications and a trial. The 8 highest scoring teams from these matches will then come to the University of Hertfordshire to take part in the Finals Weekend.

A Finals Weekend consists of:

The University of Hertfordshire will supply all accommodation and breakfast over the course of the Finals Weekend, and throughout the competition you will also have access to a 'mentor' who you can approach for advice regarding the particular activity that you are undertaking.

Alongside this, there is also the chance to learn more about Inns of Court, different providers of the BPTC, scholarships, pupillage's and general careers advice.

4 Breams Buildings is a leading set of chambers specialising in the practice of criminal law which, although based in London, has members who practise nationwide. Chambers is led by head of chambers Stuart Trimmer QC, who is widely recognised as a leading advocate in crime and related fields. Particular expertise within Chambers includes: white collar crime, serious fraud, revenue offences, regulatory offences, customs and excise, VAT, money laundering and the proceeds of crime legislation. In addition, their practice embraces all other fields of criminal law, including offences of murder, terrorism, drug trafficking, robbery, sexual offences, corporate manslaughter and offences of public disorder. They are also able to provide skilled representation in all courts from the magistrates' court to the Supreme Court and in quasi-criminal jurisdictions such as the GMC, the Coroners' court and in all forms of judicial inquiry.

OUP is the world's largest university press with the widest global presence. It currently publishes more than 6,000 new publications a year, has offices in around fifty countries, and employs more than 5,000 people worldwide. It has become familiar to millions through a diverse publishing programme that includes scholarly works in all academic disciplines, bibles, music, school and college textbooks, children's books, materials for teaching English as a foreign language, business books, dictionaries and reference books, and academic journals. They are multiple winners in recent years of the award for Publisher and Distributor of the Year at the Booksellers Association awards ceremony.

"The survival of the criminal Bar depends upon our ability to attract students who will develop into great advocates. The stress and strain of prosecuting or defending in serious criminal cases is difficult to reduce to the written page. The skill of the accomplished advocate emerges over time and with experience. Leading barristers chambers seek out those who have that spark of potential, in combination with an excellent academic record. Those who prevail in this competition will enjoy a significant advantage along the route towards a career at the Bar. The Criminal Bar Association is proud and pleased to support the National University Criminal Advocacy Competition. Good luck to all who take part."  - Max Hill Q.C., Chairman of the Criminal Bar Association 2011-2012

We would also like to acknowledge the help and support in the planning and running of the competition since its inception by:

All of whom are responsible for helping to make the competition possible.

We would also like to recognise the support and contribution of the UKCLE through the award of a grant which was made to help set-up the inaugural competition, and to aid its development in future years.