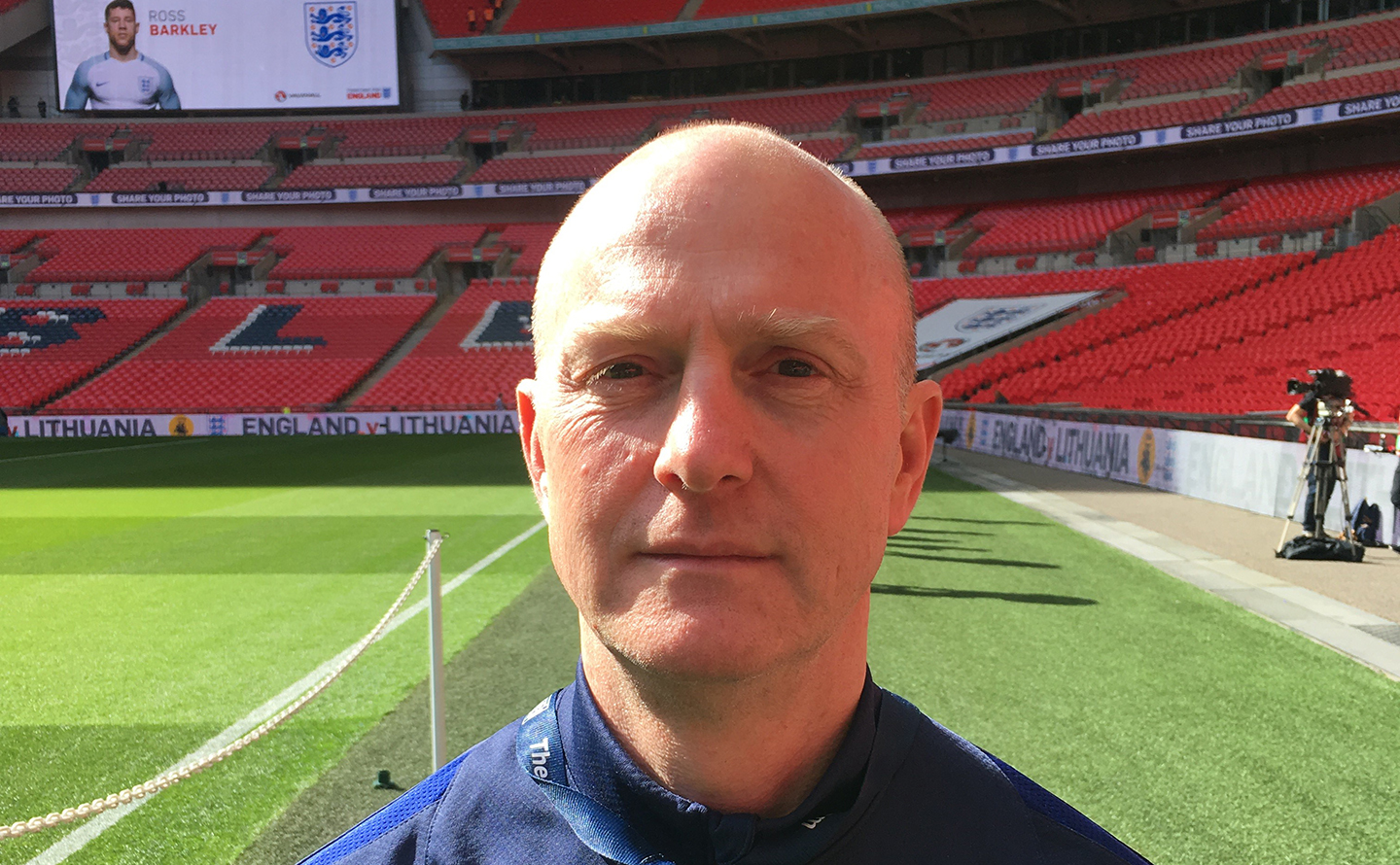 England's historic run to the final of Euro 2020 was strengthened by the work of a large support team. Herts Alumnus Joel Harris (MSc in Health Studies with Education in 2015) is a soft tissue therapist for the FA and helped keep the players healthy and fit throughout the tournament.

Joel, who is also a Senior Lecturer in the School of Life and Medical Sciences, has enjoyed a successful career in sports therapy in conjunction with his work at the University and has worked at Arsenal FC as well as for the England national football team.
We recently met with him to find out more about his career, working with England at Euro 2020 and his plans for the future.

Joel takes up the story…

'I’ve had an interesting working life so far and I think I’ve been in the right place at the right time!

In 1997 I started working part time with Arsenal as a soft tissue therapist and after 2 years I started full time at the club. Thanks to the connections I’d made whilst I was there I was offered a role in the England set up for the England U18s at a mini tournament in Spain, a team that contained Joe Cole.

I was then asked to be on the support team for the U20 World Cup in Nigeria which was a fantastic experience. I really enjoyed being part of the whole set up and in 2017 a role with the senior team became available, I applied and the rest is history.

In 2008, after 10 years that coincided with huge success at Arsenal I applied for and was accepted at the University in the School of Life and Medical Sciences as a Senior Lecturer. I am still here now and really enjoy working with the students and passing on my knowledge. I feel lucky to have such great support from the Dean of the School and the entire Sports Therapy staff.'

Talking about his role with England Joel says 'I work on the soft tissue side and mobilisation which in layman’s terms means I’m pushing and pulling the joints of players, safely of course! It’s extremely important that all the players trust what I am doing and their buy in is essential.

The players are all finely tuned athletes and it’s incredibly important that they feel ok physically and mentally. Joel was working with England at the recent Euros and found the experience different in many ways from previous tournaments.

Because of COVID-19 we were in a secure bubble. We met up on 28 May and I didn’t see my wife and youngest son until July 7th and the Semi-final win against Denmark when they were in the crowd at Wembley. When I left home my son was shorter than his mum and when I got back he was taller!

It was very difficult to switch off whether you were a player or part of the support staff. At the World Cup in Russia (2018) the families were able to travel so there was that interaction that made life easier for everyone. However, the atmosphere was great at the Euros and Gareth Southgate is a fantastic man. The togetherness was built up around the camp and it was incredibly harmonious, whether that was with players or the support staff. Everyone knew they were all fighting for the common goal and it’s amazing that everyone got on.'

Joel’s ‘day job’ is lecturing on the successful Sports Therapy course at the University and he is very proud of the opportunities afforded to Herts students.

'Our success is built around the great team of people we have in the School. It’s very harmonious and the smaller cohorts give it a family feel. The students also benefit from the industry connections we have as we encourage them all to do a sandwich year.
In recent times we’ve had students at most premiership rugby clubs including Wasps and Saracens and also at Ealing Trailfinders Rugby club who are in the division below as well as numerous football clubs throughout the divisions.

We want the students to go out into industry to experience the real world and whilst it’s a cliché, they leave as children and come back as adults.'

Joel has an interesting perspective when he talks about the knowledge he shares with his students. 'I have a lot of experience in the industry and have learned a huge amount over the years. It’s a bit like when you asked your dad to help you fix your car as he would know the little things to do from experience. I’m think I’m a bit like the dad the students ask the questions to!'

Whilst lecturing, he also completed his MSc in Health Studies and Education at the University. When talking about the importance of his Masters Joel says,

'I always think that when it comes down to it all education is good but you also have to want to learn. When I applied for the role with the senior England team it was important that I had a Masters qualification behind me as it proved my abilities. These days and certainly at Premier League football level to get one of the top jobs you would need to have that level of qualification.'

Following in his footsteps?

When we asked for any advice for someone looking at getting into a similar role he said,

'There are two bits of advice I’d give. Number one is be prepared to work for free to get as much experience as you can. It’s no coincidence that the harder you work the further you can go. People will be more likely to help you if they see you are doing everything you can to help yourself too. Go to a local club and volunteer your services. It’s all valuable experience.

Number two is to always be willing to learn. If you don’t know something don’t be afraid to say so as you can always ask and find out the answer.

I’d also say that it’s very important to be happy in the job and have a positive mindset. I have found it much better to be positive around players I have treated and it helps build a relationship with them.'

Making plans for the future

When talking about the future Joel is very much looking forward to the World Cup in Qatar in 2022.
'I hope to be involved in 2022 but football changes very quickly. It will be a very different World Cup as it’s a very small country with only 40 miles between all of the grounds. It will also be very hot even though it is happening in November.

However, I think that when it’s your country calling you don’t walk away!'.

Joel is our Senior Lecturer in Sports Therapy. Find out more about Sports therapy at the University

It’s very important to be happy in the job and have a positive mindset. I have found it much better to be positive around players I have treated and it helps build a relationship with them.
Share your story