Here you'll find the recordings from our seminar series. 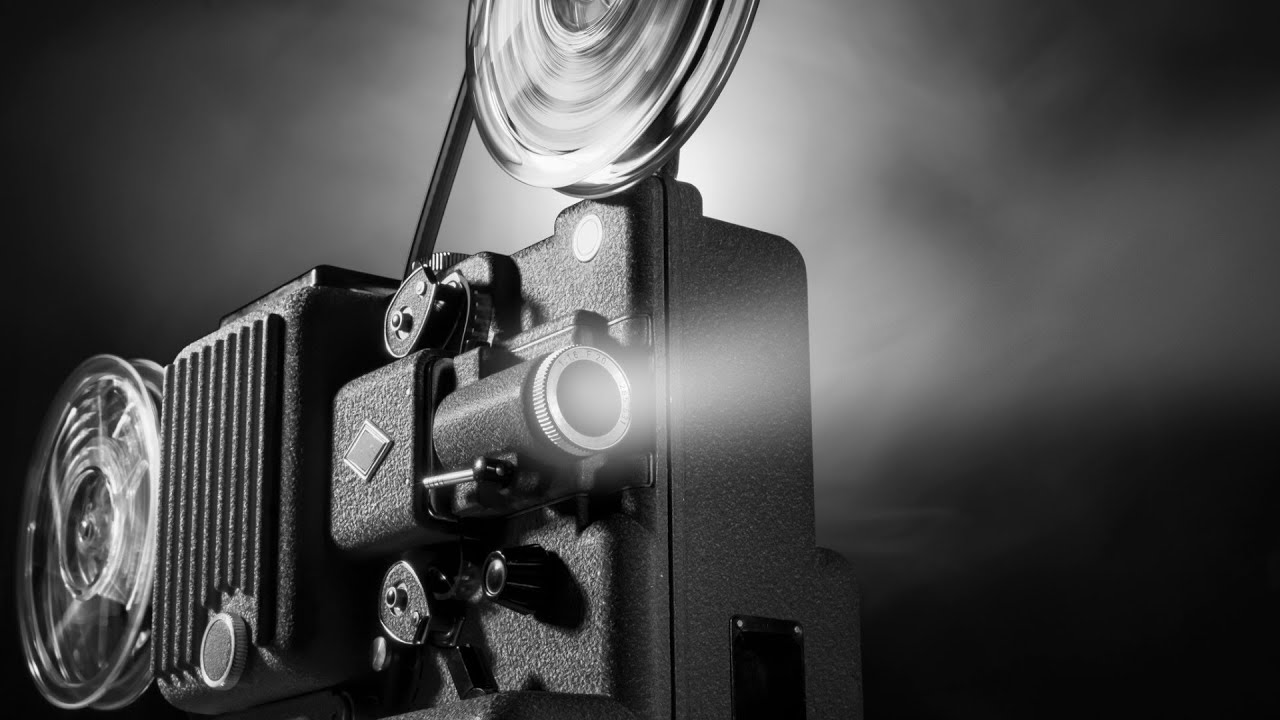 Peter Krämer notes that unmade projects ‘have absorbed much of the creativity and a substantial proportion of the financial investments of the American film industry’ (Krämer, 2015: 381). Yet unmade films have been comparatively underutilised within academic scholarship. This research talk outlines ways archival material on unmade films (such as screenplays, concept art and correspondence) can be utilised to frustrate existing methodological processes. We explore new methods for analysing the production process that underpin all films – those that are completed, and those that never see the light of day.

Dr Kieran Foster is an Associate Lecturer at De Montfort University and Nottingham Trent University. He was the producer of Vampirella: A Live Script Reading in 2019 and has written extensively on the topic of unmade films. He is the co-editor of Bloomsbury’s Shadow Cinema: The Historical and Production Contexts of Unmade Films and is currently writing a monograph entitled Hammer Goes to Hell: The Unmade Films of the House of Horror for Edinburgh University Press.

Our seminars below are listed in date order with the most recent first. 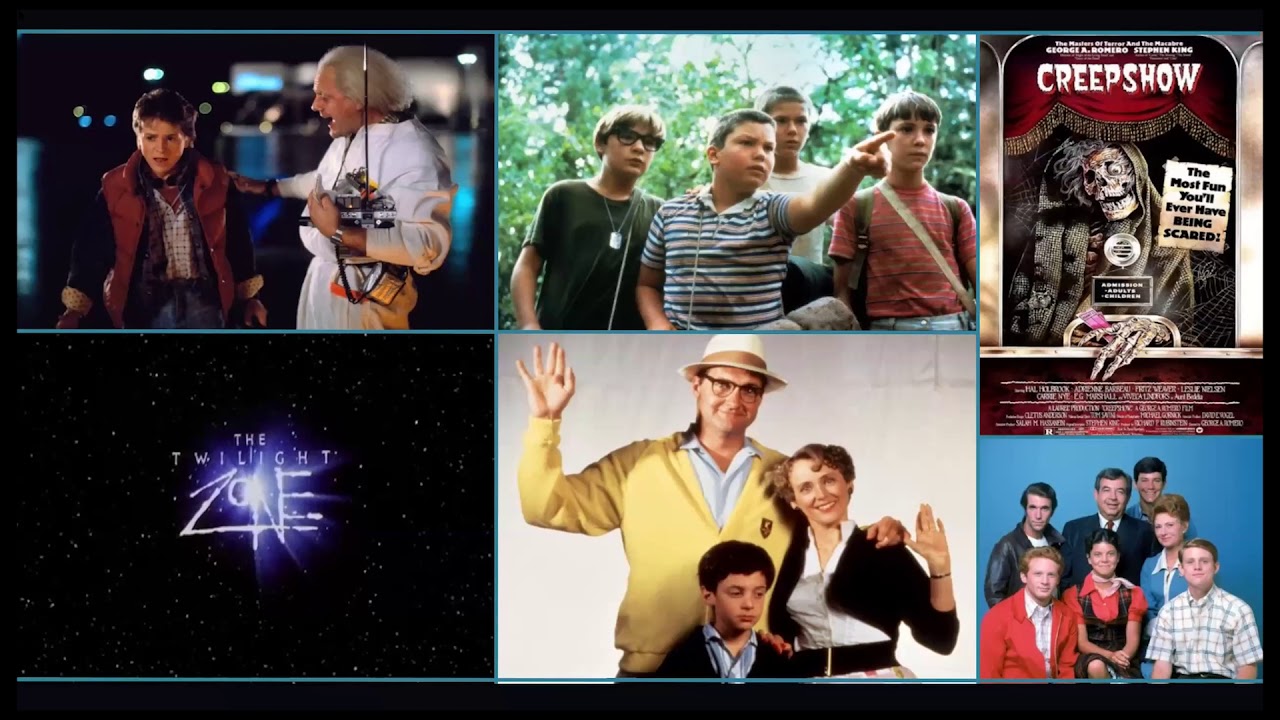 Take Me to Your Leader: Alien Invasion Films in the Reagan Era 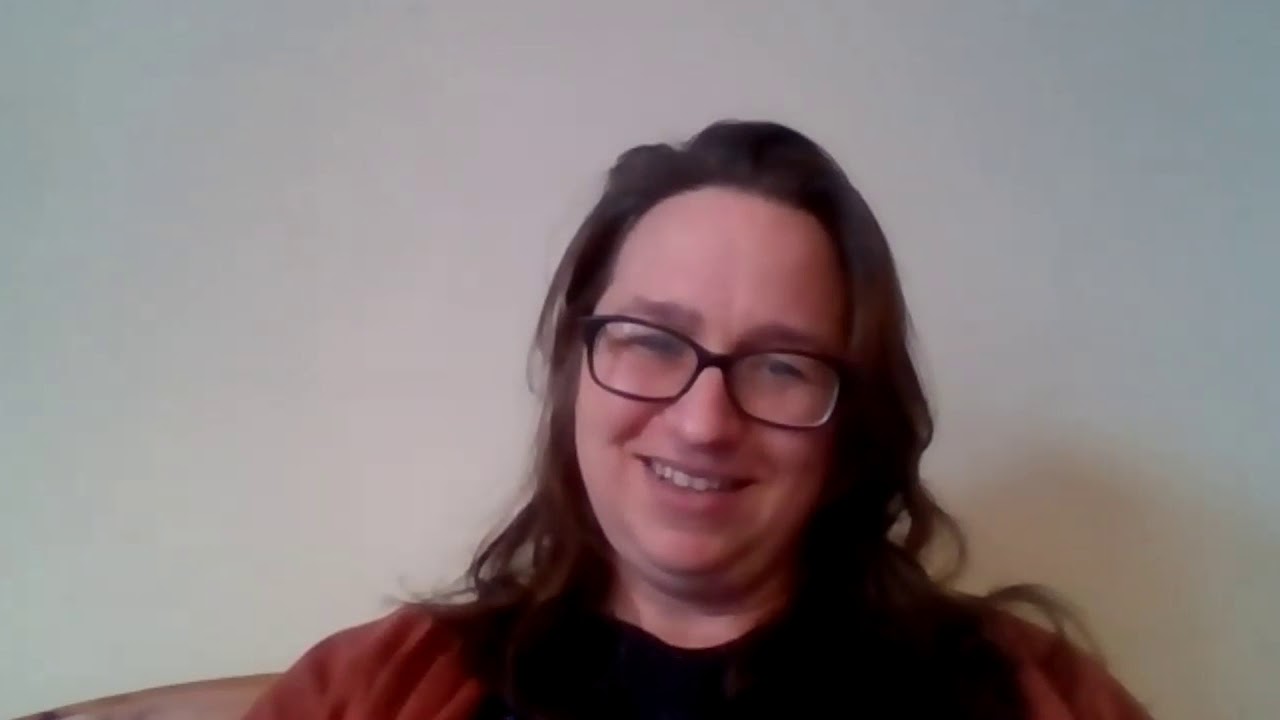 RuPaul as the ultimate winner in RuPaul's Drag Race 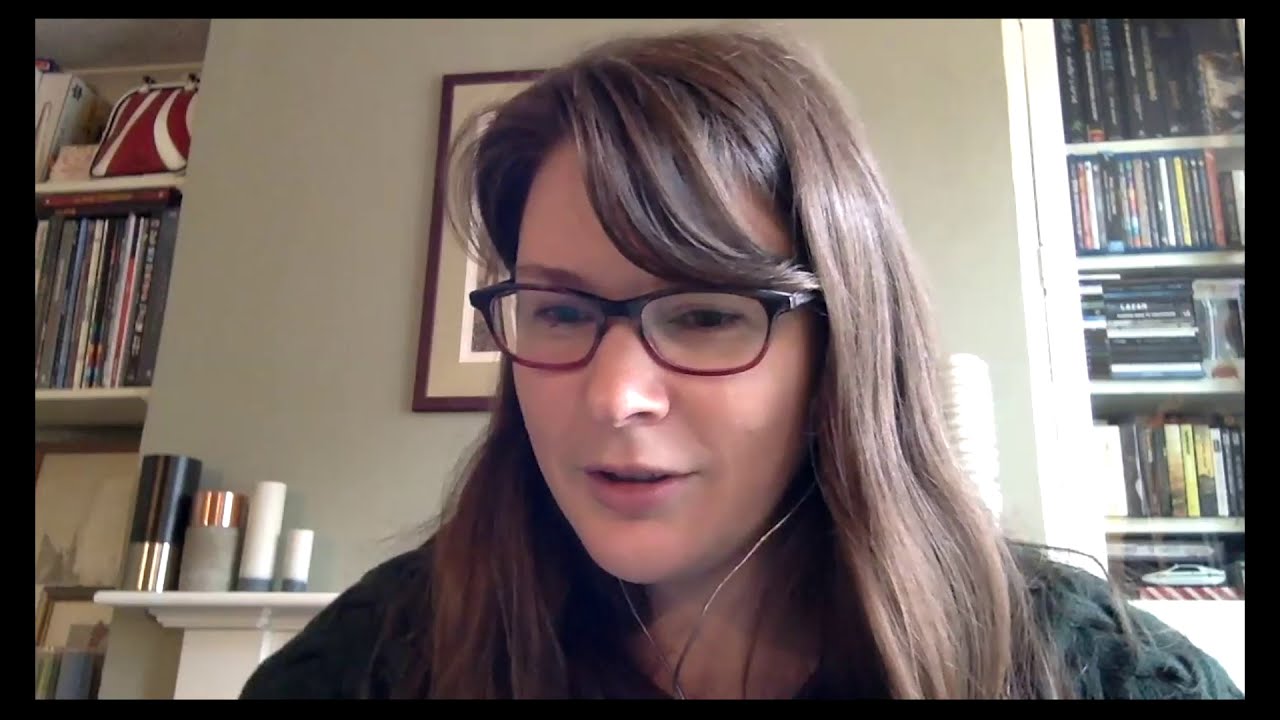 Take Me to Your Leader: Alien Invasion Films in the Reagan Era

The alien invasion narrative was, of course, one of the defining modes of science fiction cinema in the 1950s. From early examples such as The Thing from Another World (1951) and The Man from Planet X (1951) through to Invisible Invaders (1959) and Plan 9 from Outer Space (1959), America spent an entire decade obsessed with extraterrestrial invaders from worlds beyond our own.

Archetypal readings of these films have linked them decisively with Cold War tensions between the United States and Soviet Russia, and particularly with the dual threats of communist infiltration and nuclear annihilation. But as Dwight D. Eisenhower's presidency came to an end and John F. Kennedy took office, the nation's appetite for interstellar marauders dwindled in the early 1960s, and the alien invasion narrative did not experience a popular resurgence for nearly twenty years. It was only under the presidency of Ronald Reagan between 1981 and 1989 that America once again became obsessed with extraterrestrial invaders. Perhaps this is not surprising; a back-to-basics conservative, Reagan sought to erase the social progress of the 1960s and 1970s and reignite the Cold War (or, in other words, take America back to the 1950s). And, importantly, the new cycle of alien invasion films that proliferated during his presidency borrowed heavily from the golden age of science fiction cinema. This is especially true in the case of direct remakes such as The Thing (1982) and Invaders from Mars (1986), but the likes of Strange Invaders (1983), Night of the Creeps (1986) and They Live (1988) also borrow variously from Invasion of the Body Snatchers (1956), It Conquered the World (1956) and The Brain Eaters (1958) amongst others. However, they frequently revise the Cold War politics of their predecessors for the Reagan era. In They Live's take on the Body Snatchers narrative, for example, infiltrating aliens no longer stand in for communists but capitalists: its extraterrestrials are interstellar yuppies who silently brainwash the inhabitants of other planets with subliminal messages encouraging obedience and consumption.

This seminar will explore the social, cultural and political significance of the Reagan era's invasion cycle, and will pay particular attention to the ways in which they might be seen to support or subvert New Right politics.

RuPaul as the ultimate winner in RuPaul's Drag Race

Season 10 marked a decade of Drag Race, with RuPaul and other celebrities framing the show as a worldwide phenomenon promoting love, inclusivity, acceptance and Drag. This aspect of RuPaul’s Drag Race is foregrounded in much of the existing scholarship on the reality show which considers the inclusivity and visibility that it offers (Edgar, 2011; Goldmark, 2015). Although Drag Race brings an area of gay culture and history into the mainstream (i.e. RuPaul seasons and Werk the World Tour), we argue that the only Queen and Herstory that is promoted and unquestionably validated is RuPaul Herself.

RuPaul as Ultimate Queen is achieved through strategically using the themes of history and authenticity to support a commodification of RuPaul which reinforces celebrity, cultural capital and authority. From Queens lip-syncing to RuPaul’s back catalogue to the central place RuPaul places herself as drag pioneer; we explore ‘RuPaul as commodity’ and the possible implications on the presentation and marketability of gay / drag culture through the format of Drag Race and RuPaul as ultimate Queen. All queens assume the position behind her.

In this commercial space age, audiences increasingly expect realism in science fiction. Weightlessness is commonly simulated through physical or virtual special effects, but reduced gravity aircraft offer opportunities for capturing the effects of microgravity more authentically. While this poses practical challenges for costume designers, it also invites the possibility of creative engagement with weightlessness. Costume can be employed to visibly evidence the effects of weightlessness, but to take advantage of this opportunity, designers must discard many of the fundamental principles of fashion design. 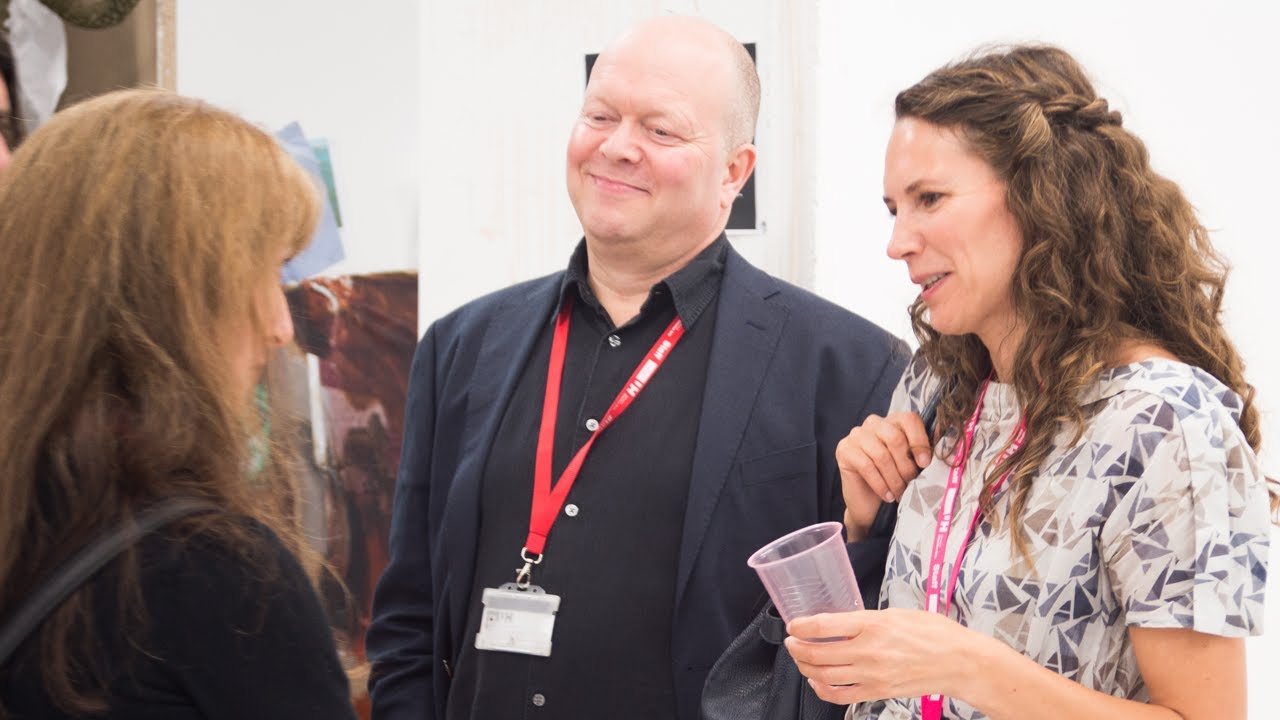 Memex in the Mirror
Using Social Media to Visualise Collective Thought in Real-time... 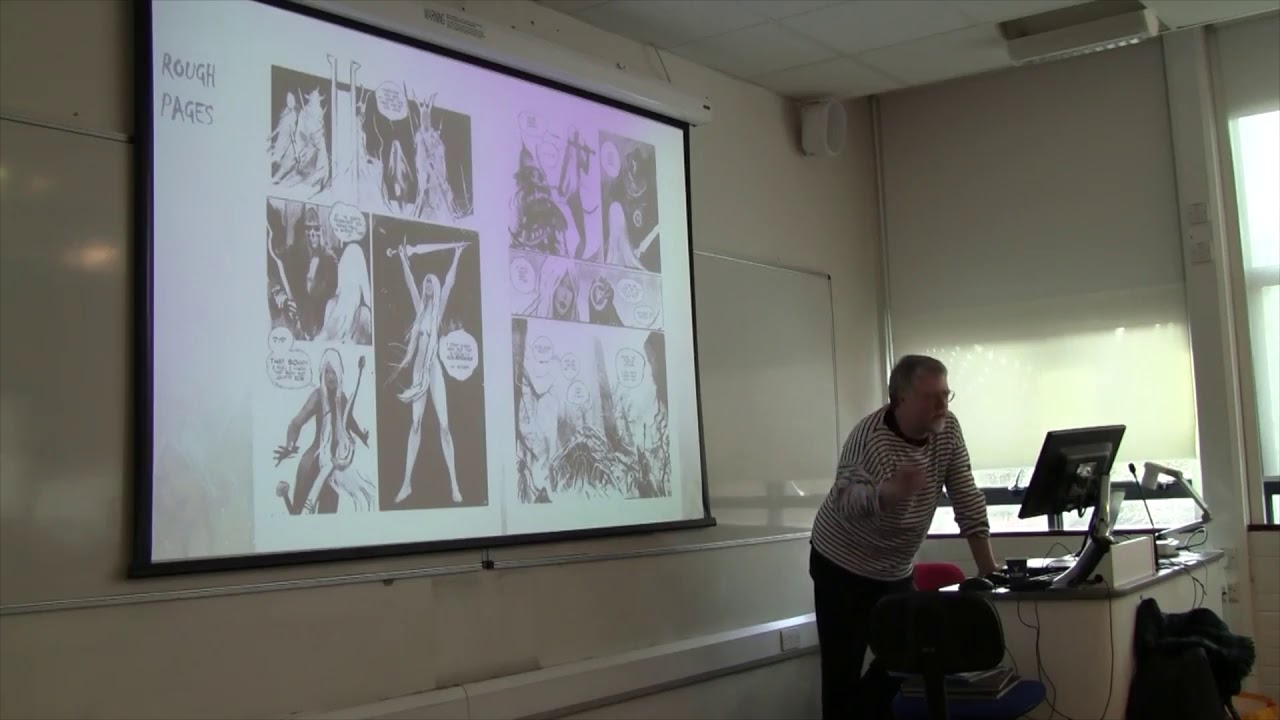 The Comics Round Table 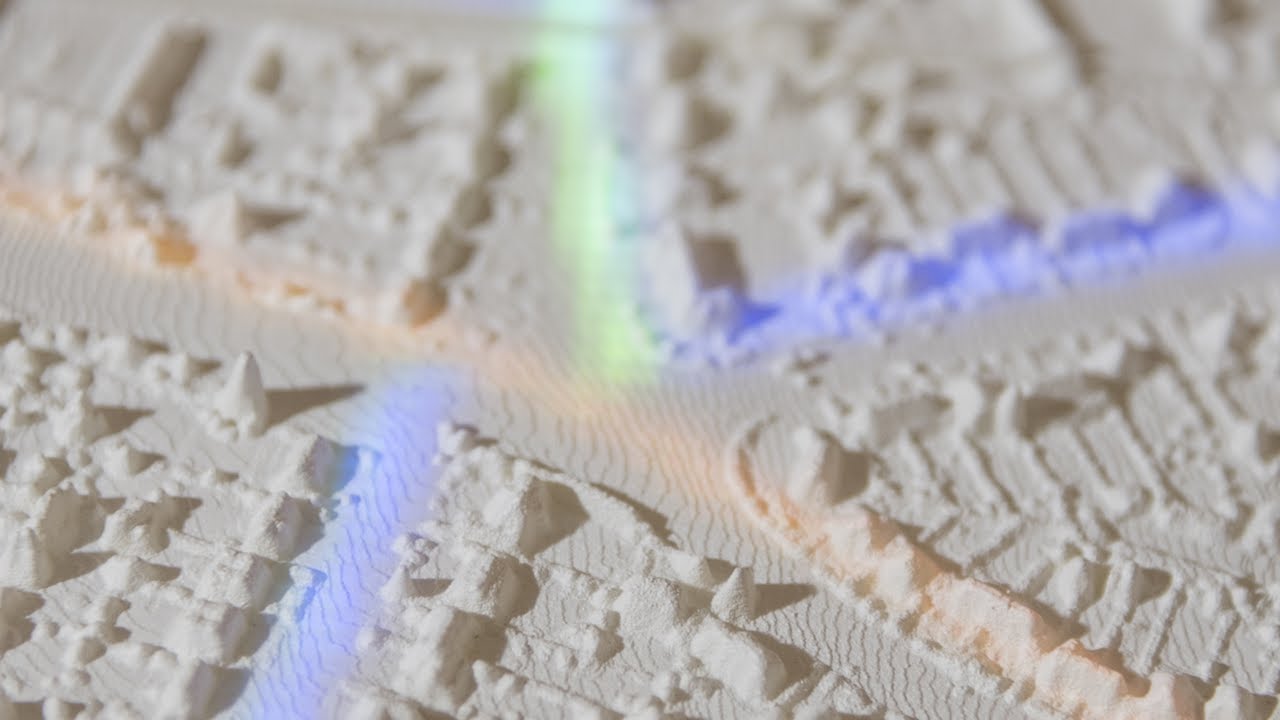 Memex in the Mirror

An introduction of a long-term research/creative project which uses real-time searches of large data sets produced by social media systems to permit the visualisation of collective thought in real-time. The project explores the relationship between technology and those who make and use it, suggesting that digital technology affects the ways modern humans think; thought patterns which the examination of social media data can reveal. This seminar also presents two implementations; ‘What We Think About When We Think About…’ which autonomously generates streams of collective consciousness, and the first public showing of ‘The Wisdom of Crowds’, a VR based digital oracle.

The Comics Round Table 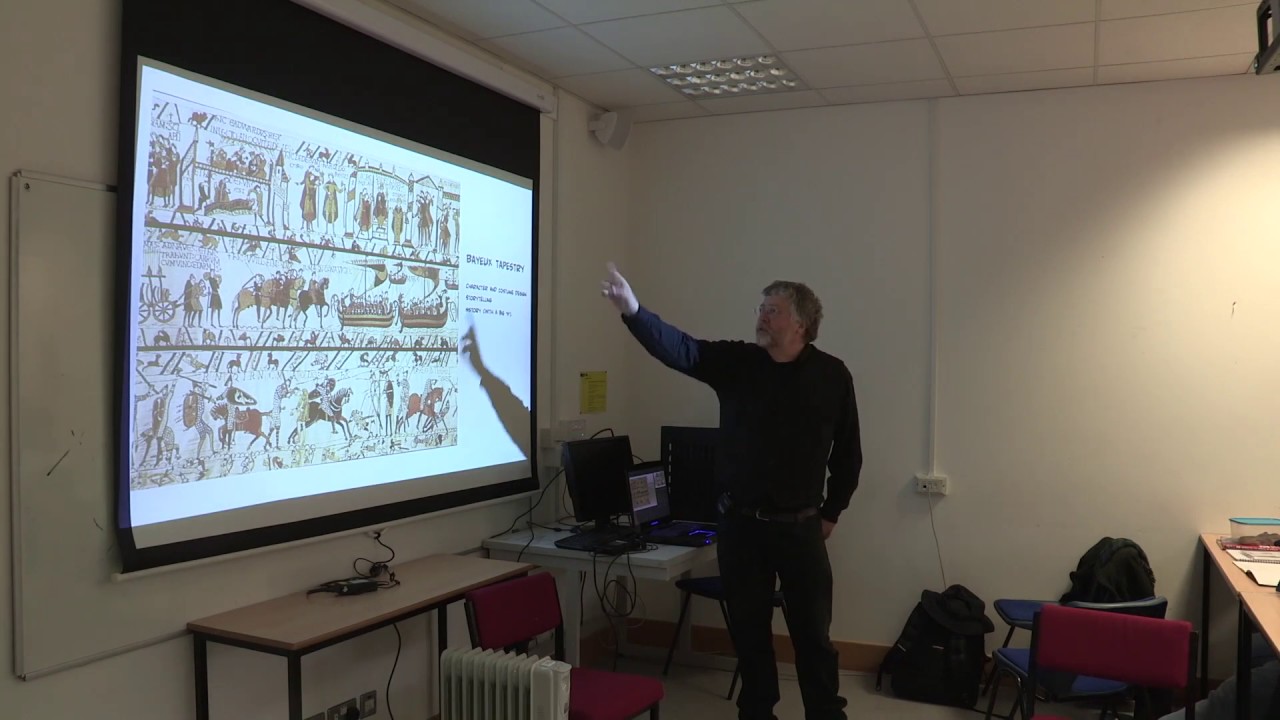 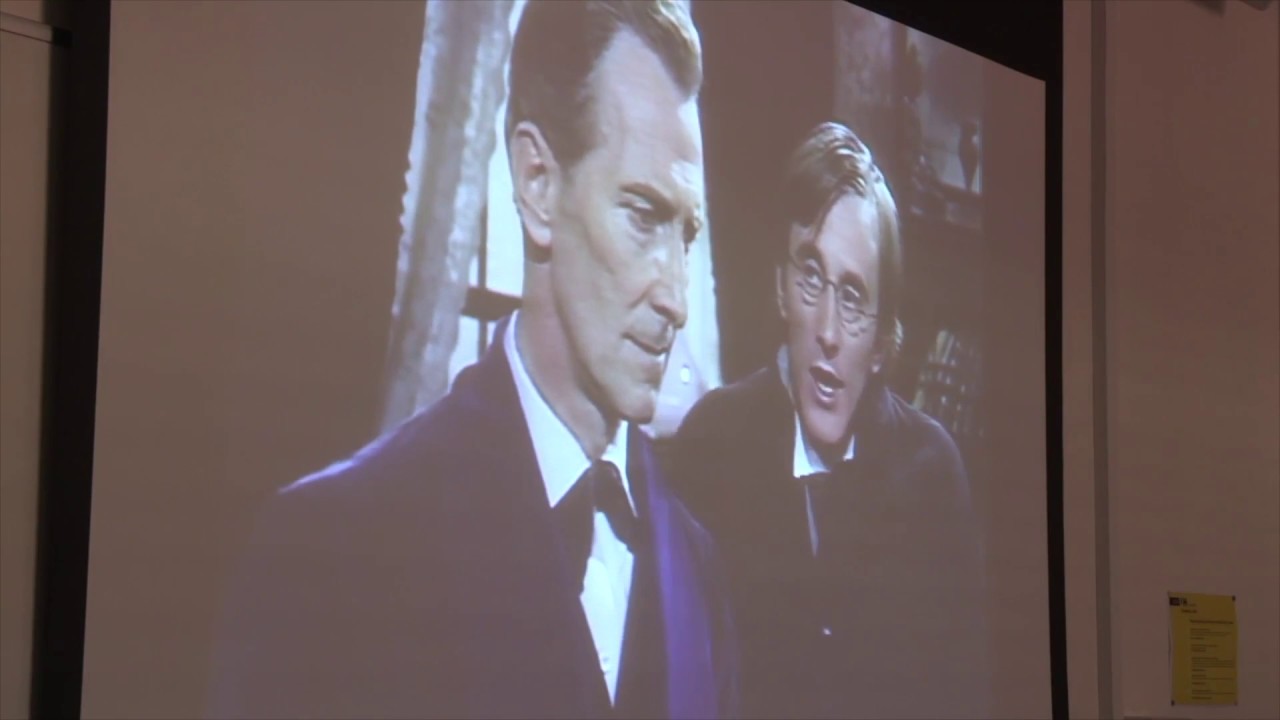 Performing Sherlock: A Study in Studio and Location Realism 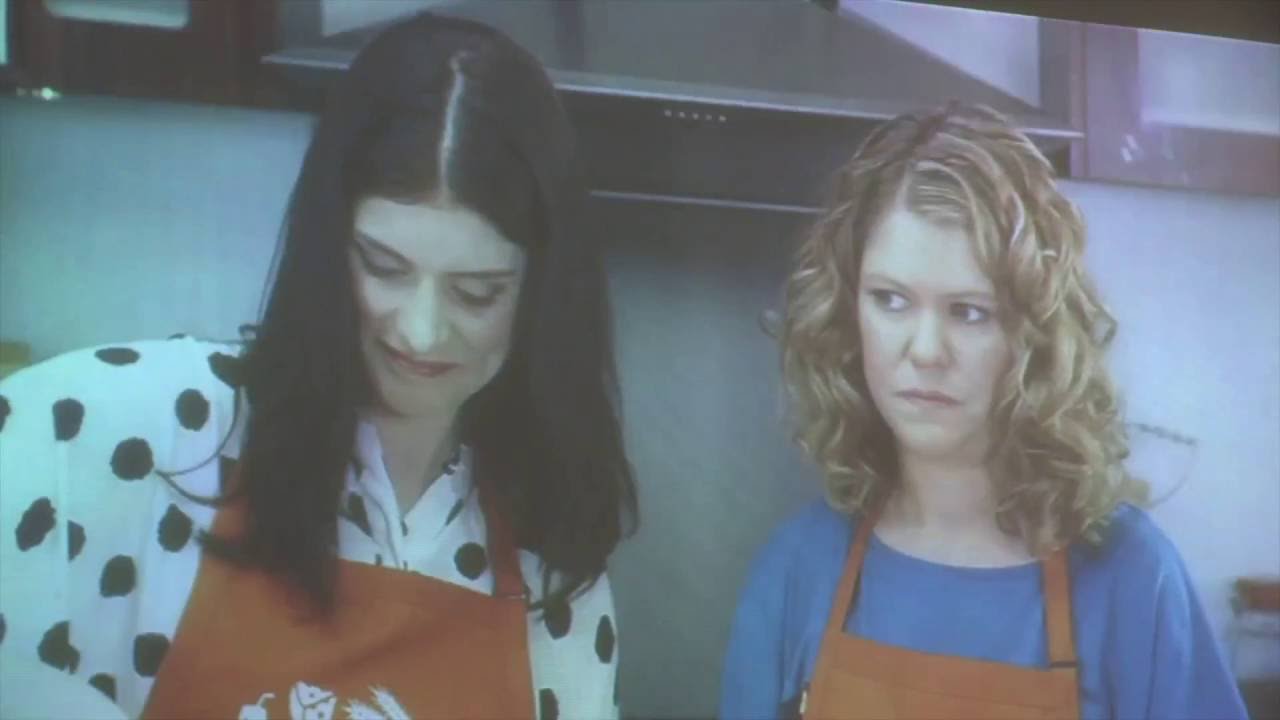 The History and Value of Web series to the Screen Industries

Frank Victoria is a Senior Lecturer at the University of Hertfordshire.  He is a concept artist and illustrator with ten years' experience in film and television. He has participated on such projects as The Adventures of Tintin, The Hobbit, and Thor, The Dark World.

Performing Sherlock: A Study in Studio and Location Realism

Dr Richard Hewett is Lecturer in Media Theory at the University of Salford's School of Arts and Media. He has previously published articles on the production of the BBC's 1951, 1965 amd 1968 Sherlock Holmes series in Adaptation and The Journal of British Cinema and Television. 2017 will see the publication of his book, The Changing Spaces of Television Acting, in addition to a chapter on the small screen performance of Holmes in the edited collection Exploring Television Acting.

The History and Value of Web series to the Screen Industries

Prof Sue Turnbull is Professor of Communication and Media at the University of Wollongong, Australia, and is currently Discipline Leader for the Creative Industries cluster that includes Media, Journalism and Graphic Design. Sue is a regular commentator on media issues in the media, is a much sought after public speaker and panelist on a range of media topics, and has for many years been the crime fiction reviewer for Fairfax press. She is a national convenor of Sisters in Crime Australia and has been a judge for the Victorian Premier Literary Awards, the Age Book of the Year and the Ned Kelly Awards for Australian crime fiction. 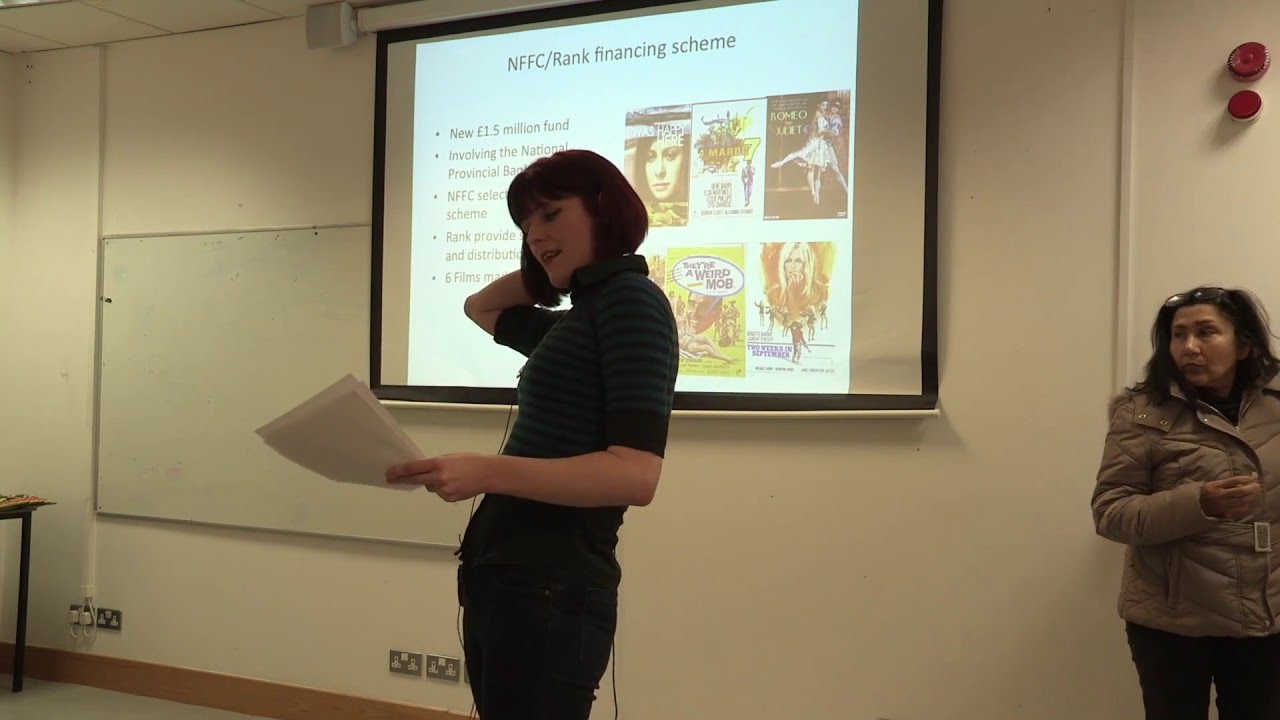 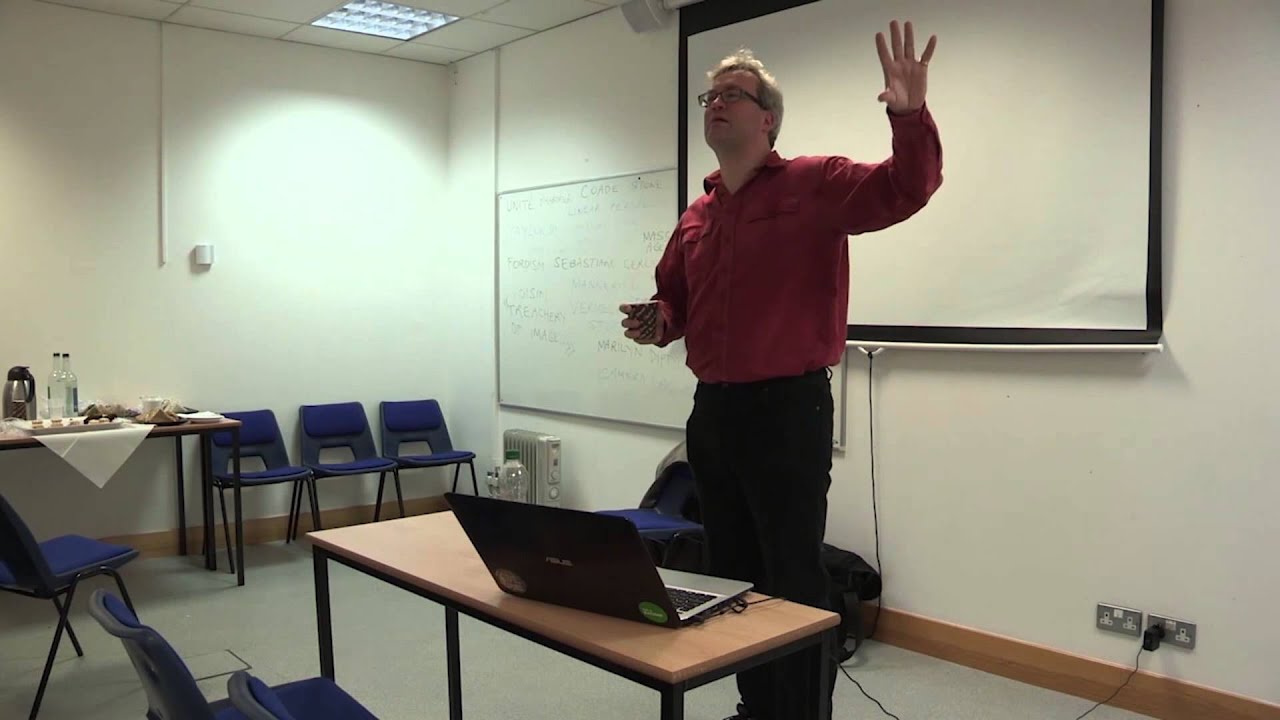 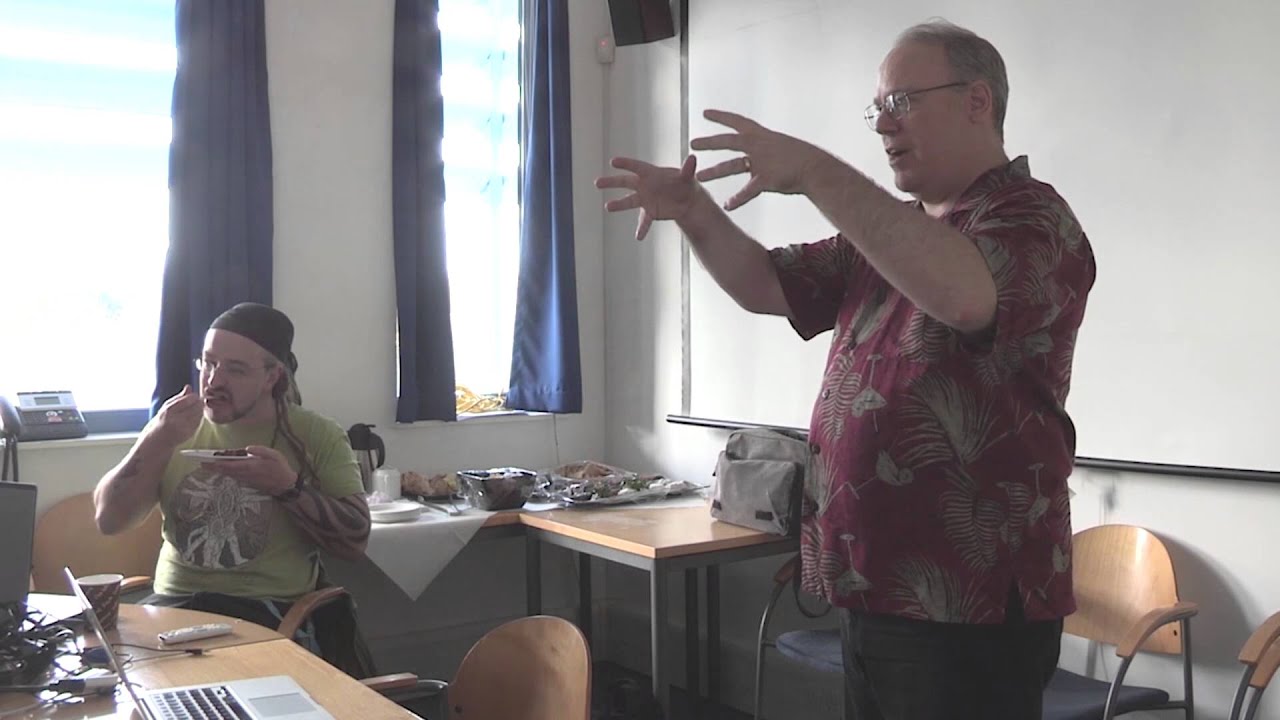 Start With Earth
Artistic Worldbuilding Using the Greatest Fantasy World Of All Time...

Production Cultures, Cross Media Relations and National Branding The historian Arthur Marwick has characterised the sixties as nothing short of a ‘cultural revolution’, an opinion widely shared by both enthusiasts and critics of the period.  Others, such as Dominic Sandbrook, have been more circumspect, adopting a revisionist approach, while in recent years water has been poured on the idea of a vibrant ‘Swinging Sixties’ as nothing more than media constructed fantasy. It is also possible to note this contrast between continuity and innovation in the British cinema of the decade.

The sixties saw a number of international successes made possible by an injection of American funding, while the New Wave cycle was hailed as a great artistic moment for British cinema and the ‘Swinging London’ films evinced a youthful vibrancy and a connection between cinema and other forms of popular culture. However, British cinema continued to be dominated by the vertically integrated duopoly of Rank/ABPC, while new practitioners found it increasingly difficult to break into an industry where certain working practices were entrenched and established filmmakers and their cinematic styles continued to endure.

Making use of underexplored and underexploited archive collections held by institutions around the UK, this 3-year AHRC-funded project, in partnership with the British Film Institute, will launch a major re-examination of sixties British cinema, taking this historical struggle between novelty and tradition at its core. The project is based between the Universities of York and East Anglia and led by Professor Duncan Petrie (York) and Co-Investigator Dr Melanie Williams (UEA), with Dr Laura Mayne (York) and Dr Richard Farmer (UEA) as full-time research associates.

James Wallis has been designing, publishing and writing about games since he was 14, when he started his first fanzine. In 1986 he set a new Guinness World Record for endurance play of Advanced Dungeons & Dragons, with a time of 84 hours (three and a half days) played non-stop, as part of the Dragonaid charity team. It’s been superlatives from that point on. He runs the games consultancy Spaaace (http://www.spaaace.com/), an agency that designs and advises on the build, implementation and marketing of traditional, digital and transmedia games and interactive campaigns. Clients include Warner Bros, Cadbury, Sony, Hasbro and Penguin Books. Spaaace specialises in interactive storytelling and creating collaborative narratives.

Line Developer for Chaosium’s Nephilim and Last Unicorn Games’ Star Trek RPG, , he has written for White Wolf, Pinnacle, Atlas, and many other game publishers. His “Suppressed Transmission” column explored the Higher Weirdness for ten years; from 1997 to 2009, he wrote “Out of the Box,” an RPG industry news and review column. He currently writes the “Lost in Lovecraft” column for Weird Tales and a column for Swedish gaming magazine Fenix. His most recent game books include the Trail Of Cthulhu and Night’s Black Agents RPGs from Pelgrane Press, a series of PDFs focusing on Lovecraft’s Hideous Creatures, and the Bookhounds of London, Qelong, Dracula Dossier, and Day After Ragnarok settings.

Outside gaming, he has written Tour de Lovecraft: the Tales, Cthulhu 101, Dubious Shards, The Nazi Occult for Osprey Publishing, and the graphic illustrated version of The Complete Idiot’s Guide to U.S. History, and published a number of Cthulhu Mythos short stories and four Lovecraftian childrens’ books. These include, Where the Deep Ones Are, The Antarctic Express, Cliffourd the Big Red God, Goodnight Azathoth.

His essays and criticism have appeared in Dragon Magazine, flamesrising.com, Games Quarterly Magazine, National Review, Amazing Stories, University Bookman, and in encyclopedias and anthologies from Ashcroft Press, Ben Bella Books, Dagan Books, Greenwood Press, and MIT Press. An Artistic Associate at Chicago’s WildClaw Theatre, he served as dramaturg for their recent stage production of The Shadow Over Innsmouth. He has also written for computer games companies including 10Tacles, UbiSoft, and inXile. Half of the podcasting team behind Ken and Robin Talk About Stuff, he lives in Chicago with two Lovecraftian cats and his non-Lovecraftian wife, Sheila. Follow his blog, if you can call it that, at http://princeofcairo.livejournal.com. Look for him on Facebook (facebook.com/kenneth.hite) and Twitter (@kennethhite).