The development of polarimeters has been part of the astronomy research programme for over 25 years. This has included private instruments used at major observatories around the world as well as polarimetry options for facility instruments.

CAR has designed and constructed polarimetry options for imagers and spectrometers for both UKIRT and the AAT.

HATFIELD POLARIMETERS: A series of polarimeters have been built here since 1975. The most versatile (HATPOL) made simultaneous broad-band observations in the UBVRI plus one of the JHK bands (Hough, Peacock & Bailey 1991, MNRAS, 248, 74). It was used extensively on the AAT and on UKIRT for a wide range of programmes, attracting a large number of international collaborations. From 1988 to 1997, HATPOL produced 33 refereed papers from 28 observing runs. These included topics ranging from AGN to AM Her Binaries to the ISM. It produced the most extensive set of optical and near-infrared polarization standards, subsequently used at many observatories (Whittet et al. 1992, Ap J, 386, 562).

PLANETPOL: The latest polarimeter, PLANETPOL, was constructed to directly detect hot Jupiter planets via the polarization of their reflected light, (Hough et al. 2006, PASP, 118, 1302). PLANETPOL is an optical aperture polarimeter funded by PPARC (now STFC), which was first commissioned at the University of Hawaii 2.2-m telescope in October 2003 (see image). Subsequently it has been used for a series of runs on the William Herschel Telescope, La Palma. Since the planet is spatially unresolved from the star, the polarization fraction from hot Jupiter systems is only a few parts in a million (see Seager, Whitney & Sasselov 2000, ApJ 540, 504). PLANETPOL has a sky channel to measure sky polarization so that this can be subtracted if necessary (it is insignificant in Dark time). The object and sky channels are both dual beam systems, using 3-wedge Wollaston prisms to send the light to four separate thermoelectrically cooled Avalanche Photodiode detectors. The modulating element in each channel is a Photoelastic Modulator or PEM, which provides a retardance oscillating sinusoidally from zero to pi at 20 kHz. The polarized signal is recovered from the second harmonic at 40 kHz using lock-in amplifiers, with the instrument controlled and data acquired using a PC running Agilent V. The analysers are rotated through 90 degrees relative to the modulators, so as to change the sign of the polarized signal and thereby remove systematic offsets.

We have developed a method for accurately measuring the telescope polarization by observing stars at different telescope positions and fitting to the polarization variation with parallactic angle. We find the on-axis polarization of the WHT is ~15x10E(-6) measured with an error of a few parts in 10E(7). The instrument itself has a constant polarization of ~2x10E(-6), The nearby (<32pc) stars observed with PlanetPol have been found to have very low polarizations, typically a few x 10(-6), indicating that there is very little interstellar polarization produced close to the Sun and that their intrinsic polarization is also low. These stars act as standards with extremely small degrees of polarization (Hough et al. 2007, 2007, ASPC, 364, 523). In practice we reach a fractional polarization of 1x10E(-6) in 390s elapsed time, or 370s integration time, for a I=0-mag star on a 4-m telescope, with a filter passband of ~320nm. The recent introduction of new detectors is improving the S/N by ~40% in a given integration time.

In addition, a programme to determine the distribution of dust in the local solar environment by measuring the polarization of stars at distances up to 100pc is being carried out, and we have also observed stars with debris disks, and stars with very high rotation rates that can produce polarization by electron scattering in a highly flattened stellar atmosphere (Bailey et al. 2010, MNRAS 405 2570-2578).

Episodes of Saharan dust over the Canary Islands occur fairly frequently during the summer months. During one such event, PLANETPOL measured increased polarization of a number of very low polarized stars, which has been attributed to dichroic extinction consistent with the presence of vertically aligned particles in the atmosphere. Modelling of the extinction together with particle orientation indicates that the alignment could have been due to an electric field of the order of 2kV/m. This observation, the first of its type, has important consequences for atmospheric radiative transfer models as well as high sensitivity astronomical polarimetry (Ulanowski et al. Atmos. Chem. Phys. 7, 6161-6173, 2007; Bailey et al. 2008, MNRAS, 386, 1016-1022; Ulanoski et al. Nucleation and Atmospheric Aerosols, 2007, 1139-1144).

TRISPEC: Hough designed the polarimetry optics and provided the waveplates for a 3-channel optical-infrared imager and spectrometer (TRISPEC), constructed at the University of Nagoya (Watanabe et al., 2005, PASP, 117, 870). The waveplates, supplied by B. Halle were of a new design covering the wavelength range 0.35 to 2.2 microns. 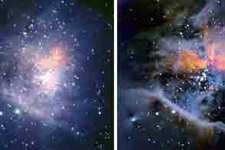