CAR has access to world-class astronomical observatories at the European Southern Observatory (ESO). Plus a suite of Island site observatories, radio observatories, and space science facilities via a UK membership which is managed by the UK Science and Technology Facilities Council (STFC). STFC also currently provides funding to a consortium of UK universities (of which the University of Hertfordshire is a member) to maintain access to James Clark Maxwell Telescope. The STFC astronomy and space science programme supports the operation of facilities and development of new instrumentation for those facilities, and also the researchers who use them.

CAR is also actively involved in new observatory instruments and facilities as detailed below.

The Low-Frequency Array (LOFAR and LOFAR-UK)

LOFAR is a radio telescope mainly located in the Netherlands. It is the first of the 'new generation' of radio telescopes, where the telescope is able to see the whole sky at once and the amount of sky that is able to be mapped is only dependent on the computing power. LOFAR observes the Universe between 20-240 MHz, with a gap at 80-110MHz which the FM radio band occupies (e.g. Radio 1).

The University of Hertfordshire is one of the UK institutes involved in the LOFAR-UK consortium which has joined the LOFAR project. The UK project has built a LOFAR station in the UK at Chilbolton, allowing higher spatial resolution observations to be made. The key science goals of the LOFAR telescope are to make deep extragalactic surveys to unprecedented sensitivity, map the transient radio sky, detect the neutral hydrogen emission within the Epoch of Reionization, study the Sun and the Solar System. At Herts our principal aims focus on the extragalactic surveys and AGN variability from the transient surveys (Hardcastle, Pierce), and radio emission from Brown Dwarfs and extrasolar planets (Burningham).

Find out more about LOFAR.

WEAVE is the new multi-million Euro facility located in the Canary Islands, that has been built by a consortium with significant UK involvement to revolutionise our spectroscopic survey capabilities. Starting in 2021, WEAVE will spend 70% of all its available time over five years conducting a suite of surveys with a very broad set of goals, ranging from studying the merger history of the Milky Way, to identifying radio galaxies at the end of the Dark ages, right at the start of cosmic history. In particular, the University of Hertfordshire’s Centre for Astrophysics Research is the lead institute for the WEAVE-LOFAR survey, which is the largest extragalactic WEAVE survey, and which aims to obtain more than a million optical spectra of low-frequency radio sources. Our particular research interests focus on the study of star-formation (Smith) and accretion (Hardcastle), as well as the important interdependence between these two key processes that shape galaxy formation and evolution across the latter half of cosmic history.

Find out more information about the WEAVE instrument, and all of the WEAVE surveys.

The Rubin Observatory Legacy Survey of Space and Time (LSST)

The Legacy Survey of Space and Time (LSST) is a ground-breaking, 10-year optical survey of the entire southern sky, which will be carried out by the Simonyi Survey Telescope at the Vera C. Rubin observatory. The project is jointly funded by the National Science Foundation and the US Department of Energy. LSST will deliver a 500 petabyte set of images and data products that will address some of the most pressing questions about the structure and evolution of the universe and the objects in it.

The University of Hertfordshire is heavily involved in this survey through leadership roles, both in the worldwide LSST project (Kaviraj is Co-Chair of the LSST Galaxies Science Collaboration) and in the LSST:UK consortium (Lucas serves as the Stars, Milky Way and Local Volume 'Point of Contact'). We are also leading an LSST:UK work package which is testing and optimising the pipeline for science in the 'low-surface-brightness' regime, which represents LSST's discovery space (PI: Kaviraj).

EXOhSPEC is a high resolution spectrograph built from catalogue components tested on the Sun and local stars fibre fed into the laboratory or with telescopes in the Canaries and Thailand. Among several novel developments that we introduce is active metrology which enables us to construct a small athermal spectrograph from off-the-shelf parts. The long-term aim of the project (Jones, Martin) is to be able to build a prototype to significantly extend the reach of precision radial velocities to higher precisions and efficiencies enabling for example a space-based radial velocity instrument. 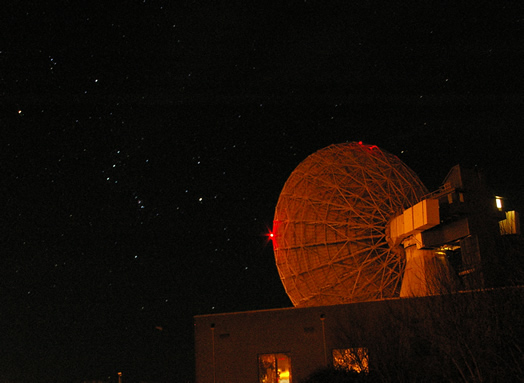 The University of Hertfordshire, is one of the partners in the Consortium of Universities for Goonhilly Astronomy (CUGA), a partnership between Leeds, Herts, Oxford, Manchester and Durham Universities. The dishes at Goonhilly Earth Station were originally used to receive the first transatlantic TV broadcast, but since then with the advent of more sensitive electronics and broadband optical fibres have become redundant for modern telecommunications purposes. CUGA are working with a commercial partner (Goonhilly Earth Station or GES Ltd) to repurpose the dishes for radio astronomy, both as a single-dish facility, and also to connect the Goonhilly dishes to the UK's e-MERLIN radio network and the European VLBI Network. The geographic location of Goonhilly in Cornwall means that adding Goonhilly to eMerlin doubles the angular resolution and makes it possible to observe sources much closer to the Celestial Equator.

The Square Kilometre Array is one of the most ambitious projects in astronomy. The aim is to build a radio telescope with an effective collecting area more than 30 times greater than the largest telescope ever built by around 2020, but with science beginning as soon as the first antennas are brought into operation. Scientifically it will reveal the dawn of galaxy formation, determine the physical properties of the Universe, such as the amount of Dark Matter and Dark Energy, test general relativity to breaking point, make the most comprehensive map of the magnetic fields in the Universe and possibly give us the most direct way of finding extra-terrestrial intelligence. The SKA will be built partly in Southern Africa, partly in Australia/New Zealand. Several members of the Centre for Astrophysics Research (Brinks, Hardcastle, Thompson) have (or have had) involvement in SKA related activities, and in SKA precursors such as LOFAR, MeerKAT, ASKAP, and APERTIF.

CAR has a long-standing historical interest in polarimeters, although we are no longer involved in instrument construction ourselves.