The University of Hertfordshire is a leader in survey astronomy at radio, submillimetre, near-infrared and optical wavelengths. 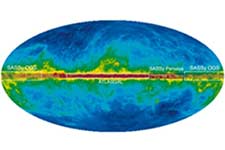 Among the major surveys of the past, present and future, there are primary ones in which we have significant involvement:

The science focus of the surveys we lead range from searches for exo-planets through comprehensive surveys of the Milky Way, out to an in-depth study of the Magellanic Clouds and beyond to high-redshift extragalactic work.

Illustration of the public surveys being conducted with VISTA and VST in Chile. CAR staff have lead roles in three of these surveys (VMC, VPHAS+ and VVV - see below), and have significant involvement in VIDEO, VIKING and VHS. Also shown in the northern hemisphere are UKIDSS/GPS and IPHAS, which we lead. Right - the VISTA telescope at Paranal in Chile.