We lead a wide range of programmes to detect and characterise brown dwarfs and extrasolar planets. We have discovered a variety of record breaking low-temperature brown dwarfs and examples with unusual properties, and are one of only a few groups worldwide to discover nearby extrasolar planets. Our projects include: the detection and follow-up of brown dwarfs from the WISE, VISTA and PanSTARRS surveys, full exploitation of GAIA to characterise unusual brown dwarf benchmark systems, ultra-cool/planetary science with a catalogue of ~400,000 M dwarfs, spectral analysis using atmospheric retrieval, Bayesian modelling of radial velocities to find multiple exoplanet systems, and new techniques to find extrasolar planets using polarimetry to observe their reflected light. We have a variety of scientific objectives; a proper understanding of ultracool atmospheres (spanning the brown dwarf and giant planet regime), a full characterisation of Galactic brown dwarf populations (mass function, birth-rate, multiplicity and kinematics), and the discovery and characterisation of the full range of multiple planet systems and Earth analogues around different types of star.

The group builds on an established heritage of mining large-scale surveys for brown dwarfs, hunting for the coolest and closest examples and studying large populations to better understand the sub-stellar initial mass function and birth-rate history, and the physics of the coolest atmospheres. We have studied L dwarfs and the latest T dwarfs in UKIDSS, and now search WISE for Y dwarfs (Teff<500K) and rare T dwarfs from older kinematic populations.

We were the first to identify an unexpected dearth in mid- to late-T dwarf numbers (compared to expectations from open cluster populations), that is either high-lighting problems with the latest evolutionary models or resulting from a varying initial mass function. We also found the observed density of LT transition objects to be a factor ~2 above expectation, suggesting the unresolved binary fraction may be higher than expected across the transition. We have discovered an unusual Y0 dwarf showing peculiar spectral morphology, and identified the majority of the first thick-disk/halo T dwarfs revealed by WISE and UKIDSS.

We also exploit the VISTA surveys (in particular VVV) through proper motion and parallax measurements, as well as PanSSTARRS. We seek to populate and study the Teff regime between typical brown dwarfs and cool giant planets like Jupiter, and through larger sample analysis better understand the formation mechanisms prevalent in the substellar mass range. 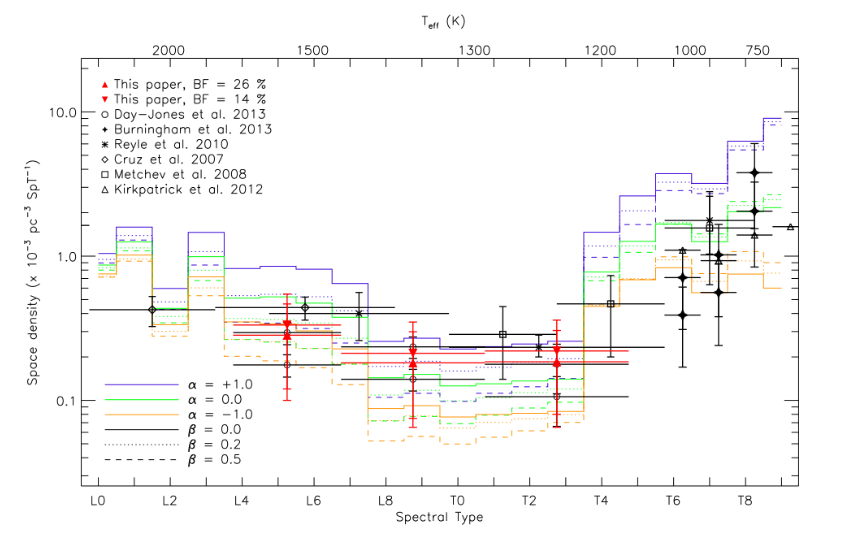 A comparison between measured space densities of L and T dwarfs with simulations, for different forms of the IMF and sub-stellar birth-rate function (taken from Marocco et al. 2015).

Picture: ydwarf_evol.png
Caption: An artistic impression of WISE J0304, a peculiar Y dwarf discovered by the group (Pinfield et al. 2014). A four-stage sequence (left to right) showing the possible extreme temperature evolution of this object. When young it was as hot as a star, shining with a temperature of at least 2800 degrees C for about 20 million years. After about 100 million years it had cooled to 1500 degrees C, and by a billion years its temperature was around 1000 degrees C. The final stage is billions of years later, when WISE J0304-2705 had cooled to its current planetary temperature of 100-150 degrees C. Picture credit: J Pinfield, 2014.

Benchmark brown dwarf systems from GAIA and the NIR

The absence of main sequence hydrogen burning causes brown dwarfs to cool and fade over time, and physical properties such as mass, radius, surface gravity and metallicity are generally difficult to determine. But brown dwarfs in multiple systems, or as members of moving groups/clusters can be much better understood. The age and composition of these "benchmark objects" can be inferred from studies of the stellar associates, and a range of physical properties determined for these brown dwarfs. We identify and study brown dwarf benchmarks in UKIDSS, UHS, SDSS, VISTA, WISE and PanSTARRS, and are expanding our search to fully exploit GAIA.

The capabilities of GAIA allow us to greatly increase the volume in which benchmarks can be found (i.e. many thousand are expected out to a distance of ~100 pc), and we are thus targeting the most revealing examples with outlier properties - e.g. metal-rich and poor, as well as ancient and young examples. Large samples of well understood and diverse benchmark brown dwarfs will provide an acid test for the model atmospheres which are the tools for a complete understanding of the substellar domain - brown dwarfs and giant extra-solar planets. 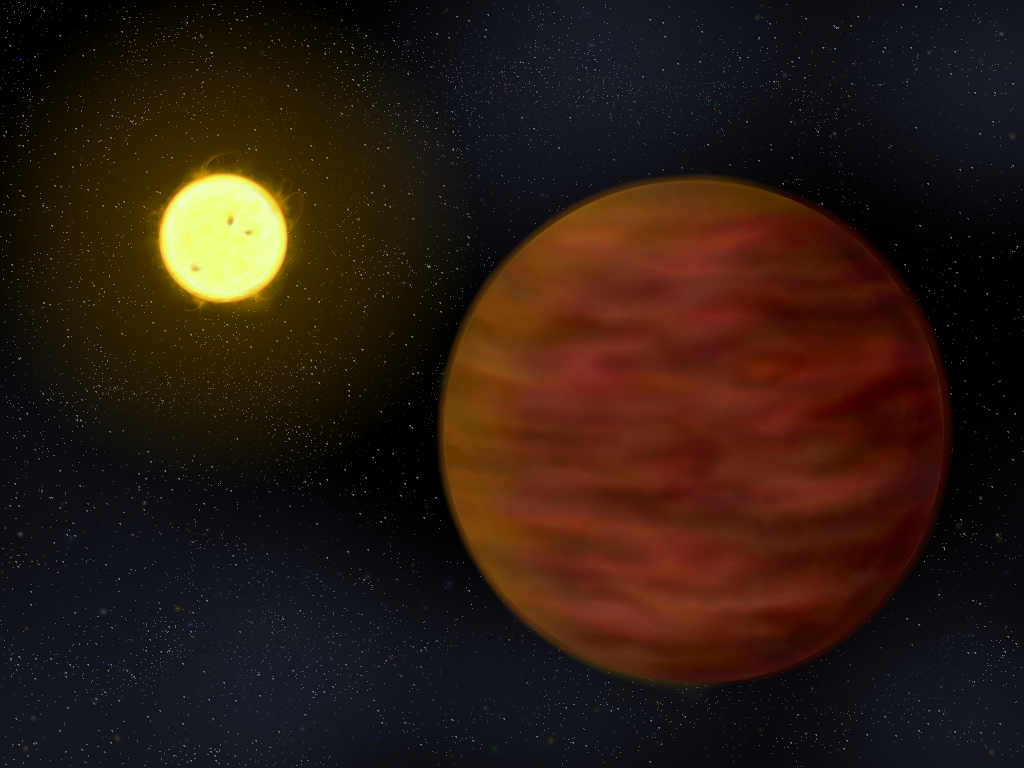 An artist's impression of the benchmark brown dwarf BD+01 2920B (Pinfield et al. 2012) in the foreground, with its G type host star in the background. Our work has shown that 0.33 % of stars have such wide brown dwarf companions, offering major scope for large benchmark populations whose properties can be informed by GAIA primaries. Picture credit: J. Pinfield, 2014.

M dwarfs and their planetary systems

Planet hosting M dwarf stars are of particular interest, because orbiting planets have much stronger observational signatures around these small low-mass stars, particularly in the habitable zone which is closer in to these cool host stars. The group's M dwarf studies are built on our new M dwarf catalogues, constructed to (i) fully identify all bright M dwarfs, and (ii) reveal the well measured population of M dwarfs in SDSS/2MASS/WISE. We study these M dwarfs using high and low resolution spectroscopy to measure Teff, surface gravity, activity and rotation. We constrain rotational inclination axis as a means to prioritise systems that may host transiting planets. We identify young M dwarfs with low surface gravity and rapid rotation, around which substellar companions (planets and brown dwarfs) will be brighter and potentially measured with adaptive optics imaging. We study widely separated multiple M dwarf systems whose coeval nature can be used to better understand M dwarf evolution and the influence of M dwarf planets on their hosts. We also carry out large sample analysis using multi-band photometry to identifies M dwarfs with MIR excess indicative of unresolved ultra-cool companions. The selection parameter space for M dwarfs with possible unresolved ultracool companions, from our new catalogue of ~400,000 M dwarfs (Cook et al. 2015). The J-W2 colour excess is derived for each M dwarf using a new technique that defines "no-excess baseline colours" from comparison samples that are "colour-similar" in the optical/NIR. The number density of the full M dwarf catalogue is shown with contours, and the colour-scaled background shows the "improvement factor" - the increase in probability that M dwarfs have unresolved ultracool companions. Picture credit: N Cook, 2015. 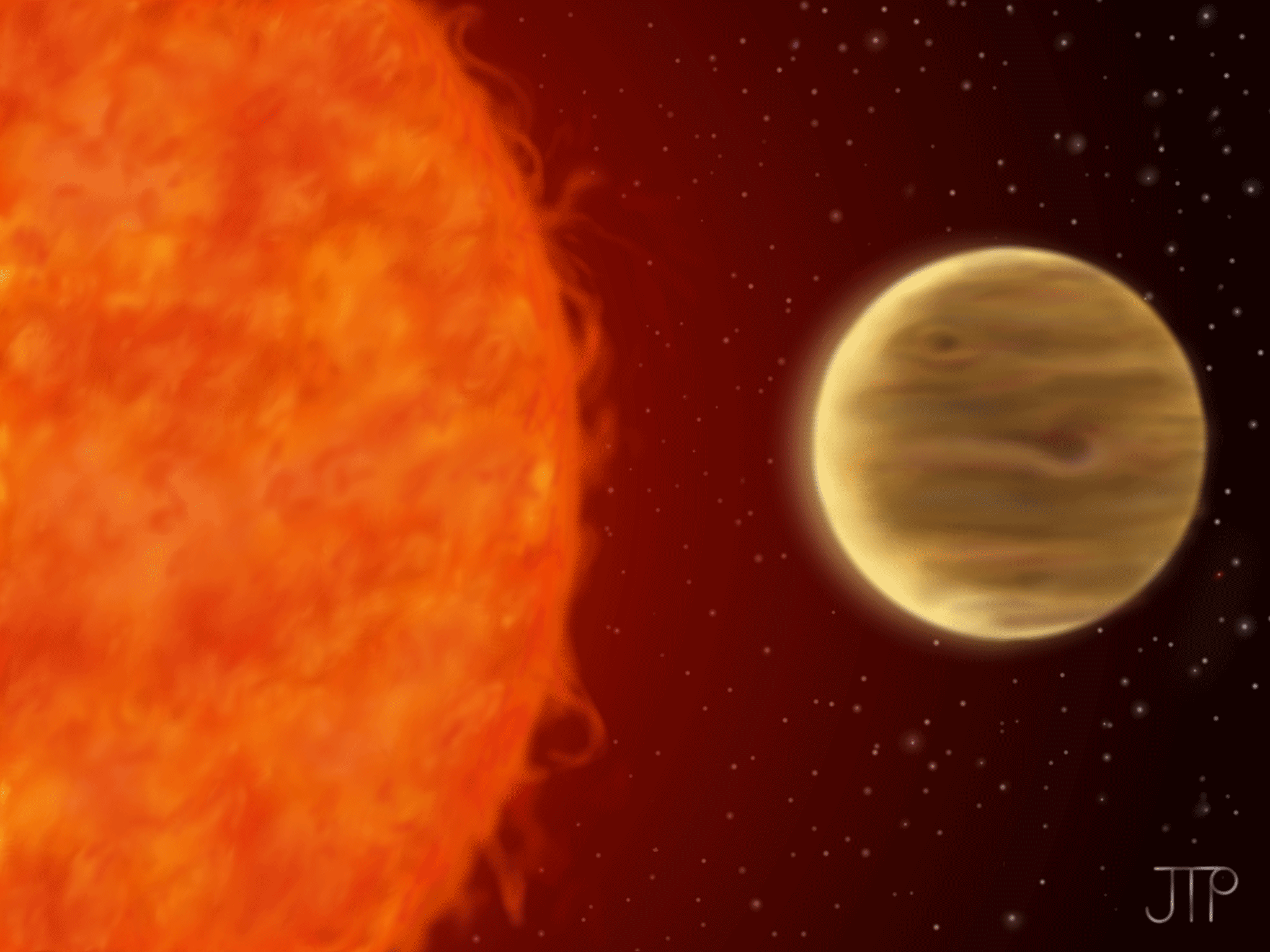 An artist's impression of the extra-solar planet WTS-2b, a hot Jupiter orbiting near its tidal destruction radius around a cool star, discovered by Birkby et al. (2014) as part of the RoPACS Initial Training Network (led by Pinfield at the UH). Picture credit: J Pinfield, 2014.

The infrared emission spectra of brown dwarfs and giant exoplanets are shaped by their temperature structure and the absorbing gases and clouds in their atmospheres.  We are developing new remote sensing tools to decode this information and reveal the temperature, composition and cloud structure of our nearest neighbours in space, and the young (~10-100 Myr old) analogs to Jupiter that are being directly imaged by new instruments such as the Gemini Plant Imager. By calibrating these tools against benchmark brown dwarf systems we will aim to relate atmospheric composition over the relatively narrow altitude range probed by our telescopes to the bulk properties of these gaseous giants. This is a crucial step in studying the properties and origin of the gas giant population of planets.

Two decades after the first discovery of a planet with the Doppler spectroscopy method the signals of few-Earth-mass super-Earths can be routinely extracted from the stellar spectra with careful calibration, reprocessings, and statistical analyses of the resulting velocities in a search for periodic planetary fingerprints. In the last ten years, the instrumental precision has been improved from 10m/s to 1m/s that enables the detection of not only Jupiter-size planets, but also Neptune-size and even smaller planets orbiting nearby Sun-like stars. Yet, the detection of another Earth-like planet remains elusive - this is because the current precision has to be improved by another factor of ten. And this is problematic - stellar surface inhomogeneities (spots and other active/inactive regions) combine with rotation and activity cycles to produces a non-white noise-floor of order 1 m/s preventing the detections of signals smaller than that in amplitude. However, modelling the resulting aperiodic and quasiperiodic behaviour with sufficiently flexible yet physically motivated statistical models can enable the detections of signals of other Earth-like planets. We are developing such models and subjecting them to the ultimate test of precision radial velocity measurements of nearby stars. With our novel signal detection algorithms and noise modelling approaches, we have detected a number of potentially habitable super-Earths orbiting nearby stars. This includes evidence for a system of small planets orbiting the nearby Solar analog Tau Ceti, the nearest Sun-like star beyond the solar system. The race is on to find Earth-like planets orbiting the stars in the Solar neighbourhood. 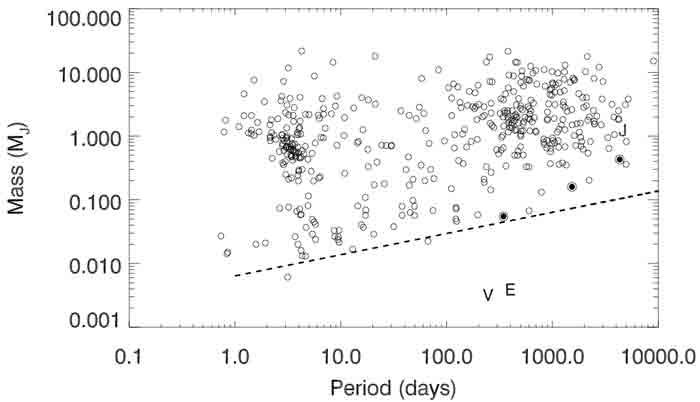 The mass-period distribution of known exoplanets (open circles) and a recently discovered system around a naked-eye star discovered by our searches (filled circles). The dashed line corresponds to 1m/s RV amplitude of a Solar-mass star. J, V and E show the respective position of Jupiter, Venus and Earth. (Tuomi et al., 2011)

Following the detection of extrasolar planets by the radial velocity method in the mid-1990s a global effort began to try and detect these planets directly. The radial velocity method pioneered by Mayor & Queloz and Marcy & Butler provides a great deal of information about planetary orbits, including the fact that many planets orbit very close to the parent star (which are known as "hot Jupiters"). However this indirect technique leaves an uncertainty in the mass of the planets and their orbital inclination, measuring only M.sin(i). It also provides no information about the composition of the planets themselves.

A number of groups are attempting to remedy this by directly observing extrasolar planets using high resolution interferometric imaging to pick out faint companions, or high resolution spectroscopy to distinguish reflected light from the planet using the wavelength shift caused by the Doppler effect.

In 2002-2004, a team led by Prof Jim Hough constructed PLANETPOL, a polarimeter with sufficient sensitivity to detect fractional polarisation signals at 10^(-6) level, i.e. 0.0001%. This instrument was about 2 orders of magnitude more sensitive than previous polarimeters used in night-time astronomy, and was capable of detecting reflected light from hot Jupiter planets orbiting bright stars, providing their albedo was above ~0.3. The instrument (see picture at top right) was mounted at the Cassegrain focus of the William Herschel Telescope for several runs in 2004-2006 and produced a number of publications, e.g. mapping the structure of the local interstellar medium by measuring polarisation towards nearby bright stars.

PLANETPOL never successfully detected an exoplanet, but it provided strong evidence that hot Jupiters are fairly dark planets at red optical wavelengths (a result since confirmed by Kepler, which finds albedos very close to zero).

Since 2013, the story has continued with HIPPI, a successor to PLANETPOL built by a team led by Prof Jeremy Bailey at the University of New South Wales. Both HIPPI and PLANETPOL employ fast polarisation modulators that operate at a higher frequency than atmospheric turbulence to achieve approximately photon-noise limited sensitivity. HIPPI has been working successfully at the Anglo Australian Telescope since 2014 as a visitor instrument, and it continues to search for reflected light from hot Jupiter systems, now at blue optical wavelengths where HST/STIS transmission spectroscopy of transiting planets indicates that albedos should be higher. Dr Lucas and Prof Hough are members of the HIPPI team, contributing to the analysis of HIPPI data for several polarisation projects. Successful detection of reflected light from a planet would enable measurement of the Bond albedo and enable a determination of the optical properties, size and perhaps composition of the reflecting particles in the planet's atmosphere. 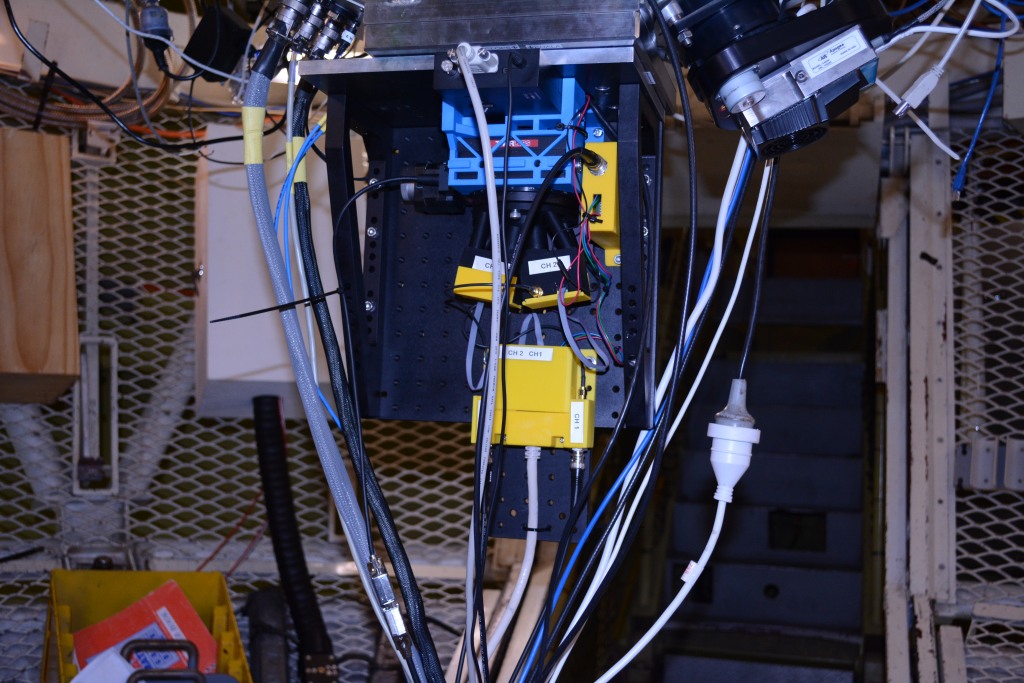 HIPPI mounted on the Anglo Australian Observatory during its commissioning run (May 2014).