The structure, formation and evolution of galaxies

The study of galaxy formation and evolution aims to address the basic question of how the Milky Way and other types of galaxy we see around us today came to be. This not only involves understanding the properties of nearby galaxies in great detail, but also looking into the very distant Universe, since the long light travel times from distant galaxies allow us to examine the properties of galaxies at different times in the past. This way we can build up an empirical picture of how they have evolved over cosmic time and compare this to numerical models.

Some of the key questions we are trying to answer are:

Galaxy formation and evolution research at CAR covers a range of areas that touch upon all of these themes, and our strong team of staff, fellows post-docs and students are engaged in a number of different projects.

The structure of galaxies

Structure in the neutral ISM

One of the key scientific drivers for embarking on the THINGS project is the desire to understand the fine scale structure of the interstellar medium (ISM) and how this varies as a function of galaxy (Hubble) type, metallicity, star formation rate, etc. Previous studies have shown that massive stars, via their stellar winds and as a result of them exploding subsequently as a supernova, can shape their immediate surrounding. Because massive stars form usually in clusters, these effects accumulate and large, coherent structures can form in the ISM. These structures, in principle expanding bubbles of coronal gas, reveal themselves in 21-cm maps of neutral, atomic gas as expanding shells or holes. One of the aims of THINGS is to relate porosity of the ISM as traced by the HI structures to current and past star formation, to determine the energy balance in the ISM, to link this to the observed velocity dispersion and characteristics of turbulence in spiral galaxies, and lastly how swept up material in these expanding shells can trigger subsequent generations of star formation. Figure 1 is an illustration of the rich structure in the form of HI shells and bubbles in the ISM of two THINGS targets, NGC 6946 and NGC 3184. 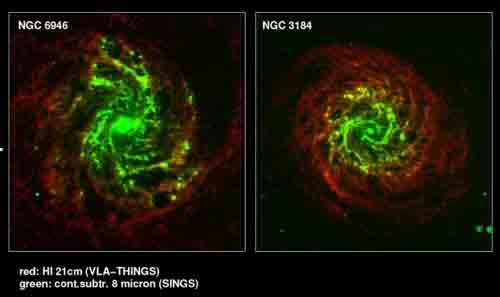 Figure 1: Comparison of VLA HI (red) and Spitzer Space Telescope 8 µ maps (green) showing a stunning correlation between the structure in the ISM seen at these two different wavelengths.

THINGS clearly demonstrates that the ISM is dominated by giant shells and supershells, ranging in size from the resolution limit to up to kpc size. The most widely accepted view on how these shells form is that the combined effects of stellar winds and supernovae originating in an OB association or super star cluster (SSC) deposit vast amounts of energies within a small volume over a short time interval resulting in a pressure-driven, expanding shell. GMCs can form within the accumulation front of shells and supershells. From recent CO maps (LMC, SMC, IC10) there is now growing evidence that GMCs do indeed form on the expanding rims of shells, or within the interface where two expanding shells run into each other (see Figure 2).

IRAM Plateau de Bure observations have been allocated to study a few small areas in some THINGS targets in detail in CO to investigate the relative location of GMCs with respect to the HI shells and supershells. 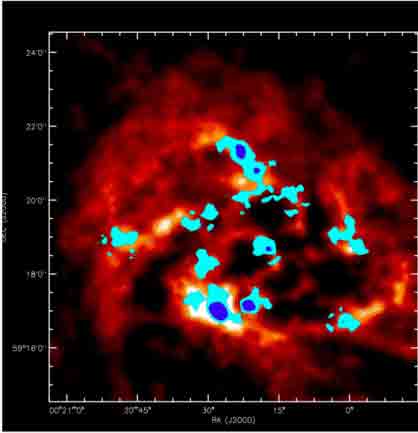 Figure 2: CO column density map (blue) overlaid on a VLA HI map (red). The CO traces cold, molecular hydrogen, i.e. regions which are likely to collapse under self-gravity and produce stars. Notice how those regions seem to concentrate on the rims of HI shells.

The outer edges of galaxies

Spiral galaxies are thought of as having a well-defined boundary. Observations at 21-cm wavelength of the atomic neutral hydrogen gas in the disks reveal two important facts: the HI disks extend far beyond their optical counterparts and they are sharply truncated. In the literature this has been ascribed to the extragalactic radiation field acting as an ionising agent of the outermost reaches of a neutral gas disk.

Based on an analysis of 9 galaxies observed as part of the THINGS survey, we find that the outermost HI structure remains at a near constant 1020 to 1021 atoms cm-2 to then rapidly turn over. This turn over occurs at column density levels that are deemed too high for the extragalactic radiation field to have any serious effect. Instead, observations seem to point towards the galaxies having a well defined edge as they simply run out of baryonic material. This assertion is supported by simulations in the literature.

The study of HI in large spirals is now being extended to dwarf galaxies in a survey known as LITTLE THINGS, to probe the low-mass, low-metallicity regime. It is expected that several of the relations found or confirmed in big spirals will break down in that low-mass regime. An example of such a relation is the Far Infrared, radio continuum relation (FIR-RC, for short). Brinks and co-workers are engaged in a multi-band radio continuum study of several dwarf galaxies. They have created the deepest radio continuum images to date at C-band (5 GHz), reaching down to 6 µJy.

Figure 4: Left: C-band (5 GHz) radio continuum overlaid as contours on a Spitzer 24µm image which is a tracer of recent, massive star formation. Right: same as the left panel but instead showing L-band (1.5 GHz) contours.

Observations in the submillimetre part of the electromagnetic spectrum are sensitive to the cold interstellar dust in galaxies, and informs us about the rate of star formation and total dense gas content in galaxies. At CAR we are heavily involved in the SCUBA-2 Cosmology Legacy Survey (S2CLS) and the Herschel-ATLAS and HerMES projects. The S2CLS is the largest of the JCMT Legacy Surveys and is the largest and most sensitive survey of its kind ever conducted, producing the first samples of thousands of extragalactic sources selected in the 450um and 850um submillimetre wavebands, an order-of-magnitude improvement in the sample sizes of previous surveys at these wavelengths (Geach et al. 2013, Coppin et al. 2015).  S2CLS has a simple two-tier design, comprising a wide 850-um component and a deeper 450-um survey over a smaller region. The target fields are located in a set of well-defined areas of the sky with appropriately low far-infrared backgrounds, and the extensive multi-frequency supporting data necessary for our analysis. This single co-ordinated survey programme will revolutionize our understanding of submillimetre galaxies, and indeed galaxy formation in general, with enormous and lasting legacy value, as well as providing a springboard for future exploitation of data from the Atacama Millimeter Array (ALMA), LOFAR, James Webb Space Telescope (JWST) and the Square Kilometer Array (SKA). Panchromatic SEDs from Smith et al. (2012), derived using star-forming galaxies in the H-ATLAS; binned according to specific star formation rate, and offset vertically, these empirical templates are cooler than other available models, and include uncertainties as a function of wavelength for the first time.

mJIVE-20 is the largest radio VLBI survey to date, which has used the Very Large Baseline Array (VLBA) to observe 30,000 galaxies detected by the FIRST radio survey, with around 5000 detections. The >10^7 K brightness temperature required for an mJIVE detection cannot be achieved via star-formation alone, which enables us to unambiguously detect nearby radio AGN and study their role in galaxy evolution. In an ongoing series of papers, we are using mJIVE-20 to explore the characteristics of radio AGN in the nearby Universe, the processes that trigger them and their impact on star formation. The unambiguous nature of AGN detection using VLBI enables us to put better constraints on these key questions than has been possible in the past.

Our recent work has shown that AGN in low-density environments are triggered primarily by mergers, and that AGN activity peaks several dynamical timescales after the peak of the associated star formation. This time delay implies that the AGN, on average, couples to the gas reservoir only after much of it has been depleted by star formation. Thus, since it impacts only residual gas, the AGN cannot strongly regulate the bulk of the starburst. Thus, while evidence for AGN feedback is strong in dense regions of the Universe (e.g. in central cluster galaxies where the gas is obtained by direct cooling from the hot halo), the role of the AGN in regulating star formation in the typical star forming galaxy is likely to be insignificant in the local Universe. This has strong implications for the way AGN feedback is incorporated in galaxy formation models at low redshift.

In a companion paper we have used mJIVE-20 to study the relatively rare population of AGN in late-type (spiral) galaxies that have nuclear radio luminosities similar to that in their early-type counterparts. We have shown that the AGN population in late-type galaxies is preferentially hosted by spirals that have high stellar masses, red colours, low star formation rates and are involved in interactions, with little dependence on the detailed morphology or local environment of the host galaxy. Furthermore, like in early-type galaxies, the onset of the AGN lags behind the peak of the star formation. The time delay between AGN activity and star formation is therefore a ubiquitous feature of galaxy evolution in general.

The latest paper in this series has probed the role of AGN in regulating star formation. Energetic feedback from AGN is thought to be an important ingredient for quenching star formation in theoretical models of galaxy formation, which makes it important to study how AGN feedback actually occurs in practice. By using interstellar NaD absorption lines to trace cold-gas outflows in several hundred massive galaxies targeted by mJIVE-20, we have shown that, of the systems that have NaD absorption-line kinematics suggestive of cold-gas outflows, not one object shows evidence of a radio AGN and a cold-gas outflow simultaneously. This work consolidates the emerging picture in which cold-gas outflows in nearby galaxies are generally driven by star formation itself and not by AGN.

The study of the distant Universe has been revolutionised by the advent of high-resolution near-infrared imaging on the HST via the recently installed Wide Field Camera 3 (WFC3). We are involved in two key programmes that have exploited the novel capabilities of the WFC3. The first is the WFC3 Early-Release Science (ERS) programme, which was a 210-orbit HST programme designed to demonstrate the WFC3's capabilities to the astronomical community. The WFC3-ERS was a precursor to CANDELS, the largest HST legacy programme to date, which has used the WFC3 to image the early Universe in the near-infrared wavelengths across almost 2 square degrees of sky.

We have used these surveys to explore the processes that drive star formation and morphological transformation in the early Universe. These studies have shown that today's massive spheroids likely formed the bulk of their stellar mass over short timescales (<1 Gyr) in the redshift range 2<z<5 and that more than 50% of primordial spheroids that were formed around a redshift of 2 do not show tidal features indicative of major mergers. Since numerical simulations performed by our group indicate that such features should be clearly visible at the depth of the WFC3 images, this work indicates that the creation of spheroids is dominated by processes  (e.g. minor-merger-triggered disk instabilities) other than major mergers.