Physics and environments of AGN

Active galaxies (AGN) are bright regions at the centres of a small minority of galaxies, powered by accretion onto the galactic-centre supermassive black hole.

Our work on 'normal' AGN, where jets are not the primary interest, focuses on the AGN/galaxy connection and on the broad-band spectral energy distributions of AGN.

The most poorly understood class of active galaxies is the small minority of radio-loud objects (including radio galaxies and radio-loud quasars), in which the active nucleus emits twin relativistic jets of highly energetic particles (electrons and positrons, and maybe heavier particles too). These jets can propagate out to distances of megaparsecs and the material that flows through them inflates large `lobes' of energetic plasma which radiates by the synchrotron process. Radio observations give insight into their complex and disparate structure but cannot on their own tell us much about quantities that interest us as physicists (energetics, internal physical conditions, dynamics and so on). In the past two decades, using the new generation of imaging X-ray telescopes (Chandra and XMM-Newton), it has become possible to make observations that probe these physical conditions directly. We are interested in the following aspects: 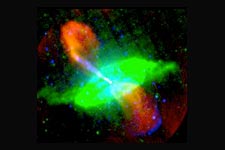 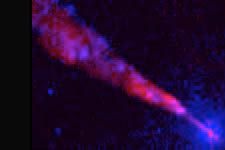 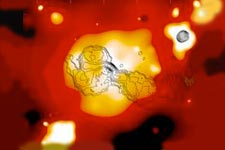 X-ray and gamma-ray emission from the radio sources themselves

Radio sources can emit X-rays (and optical light) via the synchrotron process, and observations of this process, pioneered by us, have given us new insights into particle acceleration in the jets in low-power radio galaxies and in the shocks at the terminations of high-power jets: the electrons emitting X-rays have very short radiative lifetimes, so that X-ray emission is a diagnostic of truly local particle acceleration.

However, the most important process for understanding physical conditions in radio galaxies is the related inverse-Compton process, in which relativistic electrons scatter low-energy photons into the X-ray band. This process is vital because, if we know the properties of the parent photon population, as we typically do, we can infer the properties of the relativistic electrons, such as their energies and (most importantly) their density. This information cannot be obtained directly from observations of synchrotron radiation, though such observations (e.g. with JVLA and LOFAR) are a crucial part of the process. By combining the information from inverse-Compton and synchrotron processes, we can infer the internal energy density and pressure in components of the radio source, which allows us to make quantitative statements about their dynamics and energetics. We have used inverse-Compton emission extensively to model the dynamics of hot spots and lobes in powerful radio sources, and to map the variations of magnetic field strength and particle energy densities throughout the radio lobes. Our work in this area relies heavily on in-house numerical modelling codes.

For X-ray synchrotron sources, inverse-Compton emission will only be detectable in the gamma-ray; we have worked on modelling TeV gamma-ray emission from these sources in preparation for the Cerenkov Telescope Array (CTA).

The interactions of radio galaxies and their environments

As radio lobes are collections of highly energetic particles, it has been clear for many years that there must be a medium outside them that prevents them from expanding rapidly and disappearing. The only phase of the intergalactic medium that has pressure sufficient to confine radio lobes is the hot, X-ray emitting gas that lies in the potential wells of massive galaxies, groups of galaxies and clusters. Our work with the new X-ray telescopes has shown that there is indeed an intimate relationship between the X-ray emitting material and the radio source: the radio source is both shaped by the X-ray material and in turn does work on it, which is likely to be energetically important in groups and clusters. The impact of AGN activity on the hot, X-ray emitting gas in galaxies, groups and clusters is now understood to be one of the major uncertainties in our understanding our how the Universe has evolved to its present state. In particular, the outbursts from radio-loud AGN appear to be a crucial ingredient for models of galaxy evolution and of the co-evolution of galaxy bulges and black holes, as well as for understanding the observed properties of the intracluster medium. It is also essential that the effects of AGN outbursts on scaling relations between X-ray observables and cluster mass should be understood in order to test structure formation models and to use galaxy clusters as cosmological probes. In recent years our work in this area has focussed on observation and magnetohydrodynamical modelling of interactions between powerful radio galaxies and their environment. The ultimate goal is to derive a robust measurement of the power being put into the hot phase by the radio galaxy without resorting to expensive X-ray observations, and it has been possible to show that this roughly balances the X-ray cooling rate for AGN in the LOFAR surveys.

Active nuclei: the nature of nuclear X-ray and infrared emission

In the nuclei of radio galaxies, the highest spatial resolution available is insufficient to separate the different components that must be present on parsec scales. Instead we must use X-ray spectroscopy of large samples to try to disentangle the different effects. Conventional models of active galaxies predict X-ray emission from the accretion disc, while our work and that of others strongly suggests that the jet in radio-loud sources can also have an important or even dominant effect. Our work in this area centres round the differences between the X-ray and mid-infrared properties of classes of active galaxy defined by optical spectroscopy, and the implications for the nature of accretion on to the central supermassive black hole.