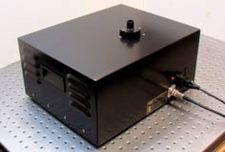 The WIBS (Waveband Integrated Bioaerosol Sensors) are a family of instruments conceived, designed and developed by the Particle Instruments group of CACP at the University of Hertfordshire.

They provide a relatively low-cost method of continuously monitoring an environment for biological particles and classifying these into broad categories such as bacteria, fungal spores, pollens, etc.

Although originally motivated by military and security concerns over possible deliberate release of organisms, the WIBS' versatility and affordability has also led to a growing international user community in areas of environmental monitoring and occupational health, atmospheric science and climate research, and clean-area monitoring (eg: operating theatres, etc).

'WIBS' technology has been now patented worldwide and in 2012 was licensed for commercial production to Droplet Measurement Technologies Inc., Boulder, Colorado, USA.

Over the past two decades, there has been huge investment, especially in the USA and Europe, in the search for real-time methods of detecting airborne microorganisms, especially pathogens.

Of these methods, so-called Laser Induced Fluorescence – the discrimination of biological particles on the basis of their UV-excited fluorescence  – has gained the greatest attention.

However, solid-state UV lasers, the favoured excitation sources, are prohibitively expensive for use in 'low-cost' detectors and international  efforts to produce cheaper UV semiconductor diode lasers of sufficient power have yet to be realised.

In 2001, the University of Hertfordshire therefore proposed an alternative approach based not on expensive UV lasers but on cheap xenon flashlamp sources, commonly used in disposable cameras. Under funding from DSTL (the Defence Science and Technology Laboratory) between 2001-9, CACP researchers developed and optimised this approach, which became known as 'WIBS' technology.