The Small Ice Detector probes are a family of wing-mounted  spatial light-scattering  instruments that are designed to capture in-situ data relating to the sizes, shapes, and abundance of individual cloud particles such as droplets, ice crystals, aerosol particles, etc. Such information is essential to meteorologists attempting to understand, model, and predict weather patterns and ultimately climate behaviour.

SID probes designed and built by CACP researchers at the University of Hertfordshire are regularly deployed in research campaigns in the UK, USA, Europe and Australasia.

The image above shows the FAAM (Facility for Airborne Atmospheric Measurements) research aircraft operated by the UK Met Office and university community showing a SID1 probe (black nose) mounted on the port wing.

The original SID1 probe was the world's first aircraft-wing mounted instrument capable of in-situ discrimination between super-cooled cloud droplets and ice crystals down to ~1um size.

All SID probes work by measuring the scattering patterns produced by individual micrometre-sized particles as they pass through a laser beam at right-angles to the aircraft flight trajectory.

The SID1 probe had just 6 discrete detectors to record this pattern and therefore could make only crude assessments of particle shapes. 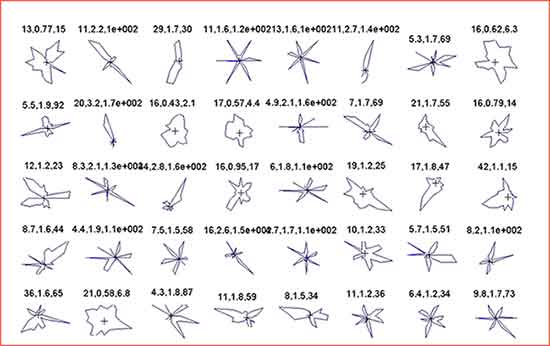 The SID2 probe had 32 detectors arranged radially about the axis of the laser beam. Each measured particle is represented on a polar scattering plot which in turn may be related to the particle's size and shape as the image shows.

This allows far more information about the shape and structure of the particle to be determined; for example, the roughness of the surface of ice crystals can be assessed and this roughness can affect the way the crystal interacts with incoming sunlight.

Multiplied over billions of particles, crystal surface roughness can actually affect the warming of the atmosphere.