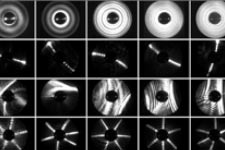 The first Particle Phase Discriminator instrument was commissioned from CACP in 2005 by Professor Paul DeMott of Colorado State University, a world-leading figure in the field of atmospheric science and cloud microphysics research.

Professor DeMott had been using a conventional optical particle counter (OPC) to monitor ice crystals and other particles drawn from a laboratory cloud simulation chamber.

However, the OPC could not discriminate between the ice and other particles nor say anything about the ice habits. The PPD was designed to overcome this limitation.

The PPD2 instrument is functionally identical to the PPD1 instrument provided by UH to Colorado State University in 2007. However, the PPD2 is designed as a self-contained laboratory instrument with in-board PC and data storage, rather than a custom sub-component for a cloud simulation chamber (as was PPD1).

The PPD2, shown in Fig.1, may be operated by connecting a mouse, keyboard, and monitor screen directly to the instrument, or alternatively, it may be operated from a remote PC via an ethernet connection.

The control software allows real-time viewing of particle light scattering-pattern thumbnail images similar to those in Fig. 2. The raw high-resolution scattering images are stored to hard-disc at rates up to ~30 images per second. Each image is accompanied by data relating to the particle arrival time, and an estimate of particle size based on the total scattered light flux recorded by the PPD2. Particles passing through the measurement space during image capture and read-out are counted, sized, and recorded.

The instrument captures the light scattering patterns from individual airborne particles drawn in from the ambient environment.

PPD2 has an internal pump which can operate at sample flow-rates of up to ~15 litres/min.

The filtered outflow of the pump currently vents into the inside of the case and escapes through cooling vents.

It is possible to configure the instrument case such that the airflow could be generated alternatively by an external vacuum source, connected either via a port in the side of the instrument or to a port in the base directly aligned beneath the scattering-chamber sample inlet. 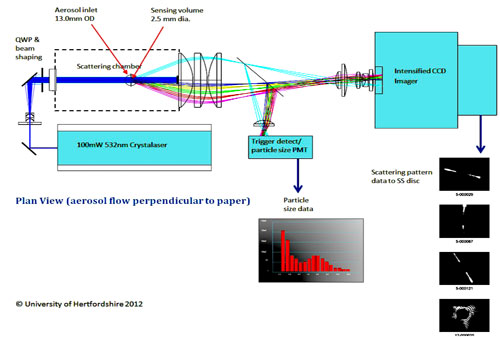