A variety of instruments and sensors developed to meet specific particle monitoring requirements. 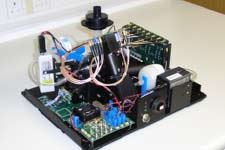 The MBS is a real-time continuous monitor for airborne biological particles. It functions by measuring and analysing specific properties of individual partials at high rates – these properties being:  Particle size (normally in the approximate range 1 - 20µm; Particle shape (or more specifically, particle scattering pattern, from which information relating to particle morphology and structure may be derived; and Particle Fluorescence (to determine the potential presence in the particle of bio-fluorophores such as tryptophan). 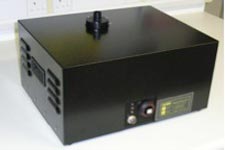 The principal components of the MBS system are shown schematically in Fig. 2. In operation, the internal MBS sampling pump continuously draws ambient aerosol-laden air through the instrument at a rate of approximately 2.8 litres/min. Part of this flow is filtered  and used both as a ‘bleed’ flow (to maintain cleanliness of the inner MBS optical chamber) and as a ‘sheath’ flow which surrounds and constrains the remaining ‘sample’ flow.  Particles carried in the remaining 400 ml/min sample flow are forced to pass in single-file through the sensing volume (defined by the intersection between the laser beam and the sample airflow column) of the instrument.

A particle carried in the sample airflow is initially detected by a low-power 635nm laser beam (position 1 in Fig.3). The light scattered from the laser pulse is collected by the lens assembly shown at the upper-right of Fig. 2 and a small proportion of the light is directed by the pellicle beam-splitter to the photodiode trigger detector. The voltage output pulse of this detector is proportional to the intensity of light falling on it and is used to size the particle. The trigger signal also initiates the firing of a second, high-power, pulsed laser that irradiates the particle when it arrives at position 2 (Fig.3), scattering sufficient light to an arrangement of two CMOS linear arrays to allow a record of the particle spatial light scattering pattern to be captured. An example from a water droplet is given in Fig. 4.

For a full-size version of Fig.2 Schematic diagram of MBS Integrated System open this PDF file.

About 10µs after particle detection, the particle will have moved approximately 400µm to just below the second laser beam (position 3 in Fig. 3) and at this moment the UV xenon source illuminates the particle. for approximately 1µs with an intense UV pulse at 280nm wavelength (typically 350 µJ/cm2 fluence). The resulting fluorescent light from the particle is collected by two spherical mirrors and directed through to the spectrometer optics. The resulting fluorescence spectrum, covering wavelengths given in Fig 5, is recorded by the 8-channel photomultiplier tube and the information digitised and recorded by the electronics control unit. Examples of spectra are also given in Fig. 5. The particle then passes out of the chamber and the system is re-armed. The total measurement process takes ~30µs, excluding subsequent data processing.

The system is capable of detecting, sizing and counting particles at rates of several hundred per second  but the xenon recharge time (~5ms) means that the maximum limit of acquisition of fluorescence data is  ~125 particles/s. This is equivalent to measuring essentially all particles for particle concentrations up to ~ 2 x 104 /litre. All data are recorded to hard-disc, and real-time data displays show rolling history plots of particle size and overall aerosol concentration, scatter data from the CMOS array detectors and the particle fluorescence data recorded by the 8-channel photomultiplier.

Data analysis algorithms have been developed to provide ‘first-pass’ real-time particle classification as part of a wider MBS software suite.