Once embraced as the 'miracle mineral' for its tough, flexible, fireproof qualities, asbestos is now seen as a killer. The International Labour Organization (ILO) estimates that 100,000 workers die each year worldwide from asbestos-related diseases.

Even in Europe, where asbestos use is banned, asbestos-related disease is still the leading cause of occupational death. This is because many workers, especially tradespeople such as plumbers, builders, electricians, etc.,  are frequently exposed to airborne asbestos fibres that are produced when the materials containing them (such as insulation, ceiling panels, floor tiles and textured wall coverings, etc.) are disturbed. There are millions of tonnes of asbestos products in existing buildings across the EU, and in the UK alone, any building built before the year 2000 can contain asbestos.

Traditional methods of airborne asbestos detection involve collecting particles from the suspect environment and then using microscopy or x-ray analysis to look for fibres. This process could take days, by which time inadvertent inhalation of asbestos could have been suffered by anyone entering the tested environment. Until now, there has been no quicker way of detecting the presence of airborne asbestos fibres. However, the Centre for Atmospheric and Climate Physics (CACP), part of the School of Physics Astronomy and Mathematics, has developed a new technique which can analyse airborne particulates in real-time and determine whether or not fibres are present and whether those fibres are asbestos.

The Particle Instruments Research Group first proposed their detection method over a decade ago, but it was too expensive to implement in a device that could be used routinely by tradespeople and others. Then in 2009, they were invited to join a consortium of European Trade Associations in an EU project 'ALERT' that sought to find a solution to the asbestos problem. The PI Group were funded through the €1.78 million 3-year consortium project.

The resulting 'ALERT' instrument can detect airborne asbestos in minutes or even seconds (depending on fibre concentration) rather than days . It has been tested extensively in field locations involving commercial, public, and domestic buildings where asbestos clearance work (so far involving crocidolite, amosite and chrysotile asbestos forms) has been undertaken.

Since the end of the FP7 ALERT project, we have been working with Alert Technologies Ltd to develop the prototype into a commercially viable product. The first units are due to be on the market in the second half of 2019.

Asbestos is a material comprised mainly of complex iron, aluminium, magnesium and sodium silicates with a crystal structure which, when it is broken down or crushed, forms fibres or bundles of fibres that divide lengthwise into increasingly smaller filaments, of which there may be billions in the air. Inhalation of such fibres gives rise to a number of conditions which have become a leading cause of work related deaths. In 1990, the US National Institute for Occupational Safety and Health (NIOSH) stated that there is "no evidence for a threshold or 'safe' level of asbestos exposure". In 2010 the World Health Organisation estimated that approximately 100,000 people die each year from asbestos-related lung cancer, mesothelioma and asbestosis resulting from occupational exposure.

The most commonly used method for assessing airborne asbestos fiber concentrations is based on filter cassette sampling of the ambient air. Filters are subsequently removed for examination by phase contrast light microscopy (PCM) to count fibers having predefined length and minimum aspect ratio (typically 5 µm to 15 µm and 3:1 respectively) within grid areas. This process can determine fiber concentration in the sampled air but cannot establish whether the fibers are asbestos or a less hazardous material such as, for example, mineral wool, glass, or gypsum, a common fibrous material widely used in building fabrics. To achieve unambiguous asbestos identification, the detected fibers must undergo crystallographic analysis by energy dispersive x-ray technology (EDAX). Such procedures are time-consuming and expensive. Until now there has been no real-time method for detecting airborne asbestos fibres.

The Particle Instruments Research Group has developed a technique using a two-stage analysis involving laser-light scattering and magnetic alignment to provide rapid assessment of airborne particulates for the presence of asbestos fibres. 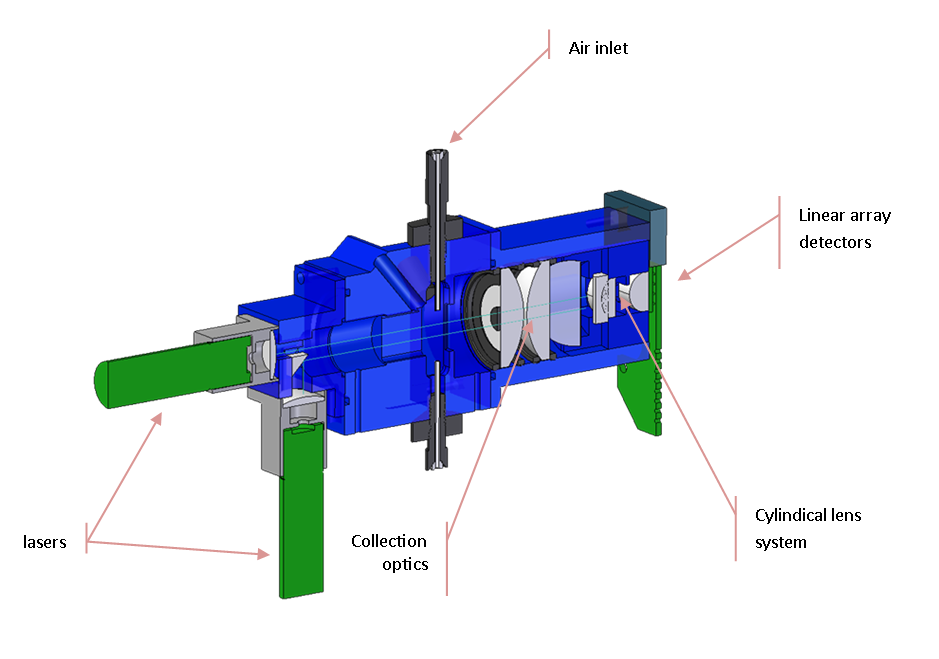 The above figure shows a cut-away representation of the  instrument chamber which contains the core system components. Ambient air is drawn through the inlet. Airborne particles are constrained in the flow and pass through two laser beams, one above the other separated by 3mm. Between the two beams the particle passes through a horizontal magnetic field (not shown). When the particle is in either of the beams, forward scattered light is focused on to a pair of vertically oriented linear array detectors which record two segments of the scattering pattern enabling us to quantify the particle shape and, in the case of a fiber, its orientation. The scattering pattern from fibres is very distinctive and a simple analysis can distinguish them from non-fibres.

Asbestos possesses the property of paramagnetism which means that in the presence of a magnetic field a fibre will experience a torque causing it to align itself in the direction of the field lines. The scattering patterns can be analysed to provide a measure of the orientation of a fibre and thus a change in the orientation as the fibre moves from one beam to another. In an ideal situation non-asbestos fibres will pass through the two beams in a stable orientation since they are not affected by the field where as a change in orientation of asbestos fibres will occur. In practice all fibres change orientation to some degree but the distribution of orientation change is greater for asbestos and it is this difference which enables the instrument to detect the presence of asbestos in a population of fibres. work is now ongoing to progress the instrument to a production prototype.