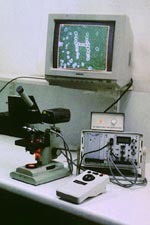 Optical trapping, developed at Bell Labs in the mid 1980s and known sometimes as "laser tweezers", is a non-contact technique for the manipulation of microparticles by using radiation pressure generated by the scattering of a tightly focused laser beam. Due to its unusual properties, such as the ability to manipulate an object totally enclosed within another object, there are now many wide-ranging applications of optical trapping. Here it fulfils a specific need for a method of non-destructive particle manipulation for use in light scattering studies, where a small object is probed by one laser beam while being held by another one. In this way valuable information can be obtained about, for example, the internal structure of living cells and changes taking place within cells undergoing development or subjected to treatments. The instrument used for trapping microparticles was designed and built at University of Hertfordshire and was the first self-contained, portable "optical trapping microscope". Since it was first constructed it has been the basis of development work in optical trapping as well as studies on specific applications, such as microbial cell sorting and isolation. Our research also includes the theory of strongly focused Gaussian beams.

Examples of optical trapping in action