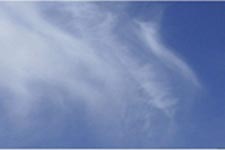 Cirrus clouds, despite being thin and wispy in appearance, have a profound influence on the Earth's climate. By redirecting solar and thermal radiation they can have an overall warming effect - unlike other types of cloud. Moreover, cirrus may be causing a positive climate feedback: higher temperature can result in more cirrus, potentially leading to further warming and so on.

This would have the effect of amplifying man-made climate change. For these reasons, it is very important that properties of cirrus are incorporated into climate models. While such models have become very comprehensive and accurate, cirrus clouds are the source of some of the greatest remaining uncertainties. This is because the properties of cirrus, most notably the manner in which small ice crystals contained in the clouds scatter light, are not yet accurately known. 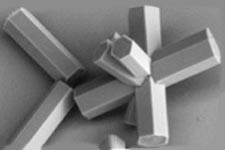 We have been developing new methods of studying cirrus, making it possible to measure light scattering in the laboratory, instead of having to take complex equipment into high-altitude clouds.

The methods are based on combining techniques like electrodynamic levitation with materials resembling ice - ice analogues. Levitation allows us to measure scattering properties like the phase function (for scattering angles from 0.5˚ to 177˚), the degree of linear polarization and the asymmetry parameter for single ice-analogue crystals.

We have developed two ice analogues: fine glass fibres with hexagonal cross-section and crystals with shape, size and optical properties closely resembling those of atmospheric ice. Unlike ice, these materials can exist at room temperature and do not change their shape and size under normal conditions, which makes them much easier to study than ice.

They can also be transported between different laboratories. Therefore, in addition to light scattering studies, the analogues are very useful for the testing and calibration of in situ cloud probes such as the SPEC Cloud Particle Imager and the University of Hertfordshire Small Ice Detector series of instruments.

We have produced a variety of crystals, including simple shapes such as hexagonal columns or platelets and more complex ones such as rosettes and aggregates - see pictures on this page. Further examples can be viewed in the Ice-Analogue Image Gallery, which also features the Ice-Analogue Flower Garden.

If the wavelength is not small compared to the scattering object, the wave properties of light need to be considered: interference and diffraction occur.

Observations of scattering effects produced by the analogues have led to the development of a novel, efficient computational model called Ray Tracing with Diffraction on Facets (RTDF). It describes the scattering of light from faceted objects such as crystals, including those that can be modelled as polyhedra with many thousands of small facets, e.g. spheres, ellipsoids or more complex shapes. RTDF approximates scattering by combining ray tracing with a new formulation of diffraction.

Tests done using the analogues have shown the model to be more accurate than the most widely used method for calculating scattering from cirrus crystals - the Geometric Optics approach.

Furthermore, we have been developing a Beam Tracer, which traces not rays with extremely small cross sections, but entire beams, e.g. those reflected at the incidence facing facets of the hexagonal prism in the figure below, and applies diffraction. These methods are very fast compared to numerically exact methods.

The figure shows beam tracer results for a smooth and a rough hexagonal prism (edge length of the basal facets 5 μm, prism height 10 μm, n = 1.31+0.1i, wavelength 500nm). The 2nd and 3rd row show the distribution of light scattered into the forward scattering and back hemisphere, respectively. For the smooth prism, the numbers indicate the reflecting facet. Where geometric optics would just produce a tiny bright spot, diffraction arcs occur in our physical optics model. It is clearly visible, how the surface roughness changes light interference and the resulting scattering pattern compared to the smooth prism, producing speckle. A beautiful way in which cirrus clouds manifest themselves is through halos - circles, arcs and spots of white or coloured light seen when sunlight or moonlight strikes thin ice-clouds. Cirrus is a virtually unique source of these displays because they are produced by the refraction of light-rays passing through ice crystals.

A tangible demonstration that the new ice analogues do indeed resemble real ice was provided in September 2002. We used the crystals to produce realistic halo displays - apparently the first time this was achieved in a laboratory - see the picture and the Analogue Halos page.

A property of scattered light especially sensitive to particle shape is polarization. We are developing an imaging polarimeter for the remote sensing of cirrus - see our Cloud Polarimetry page.

This project has been funded by the NERC Clouds Climate and Water Vapour, APPRAISE and ACID-PRUF thematic programmes.