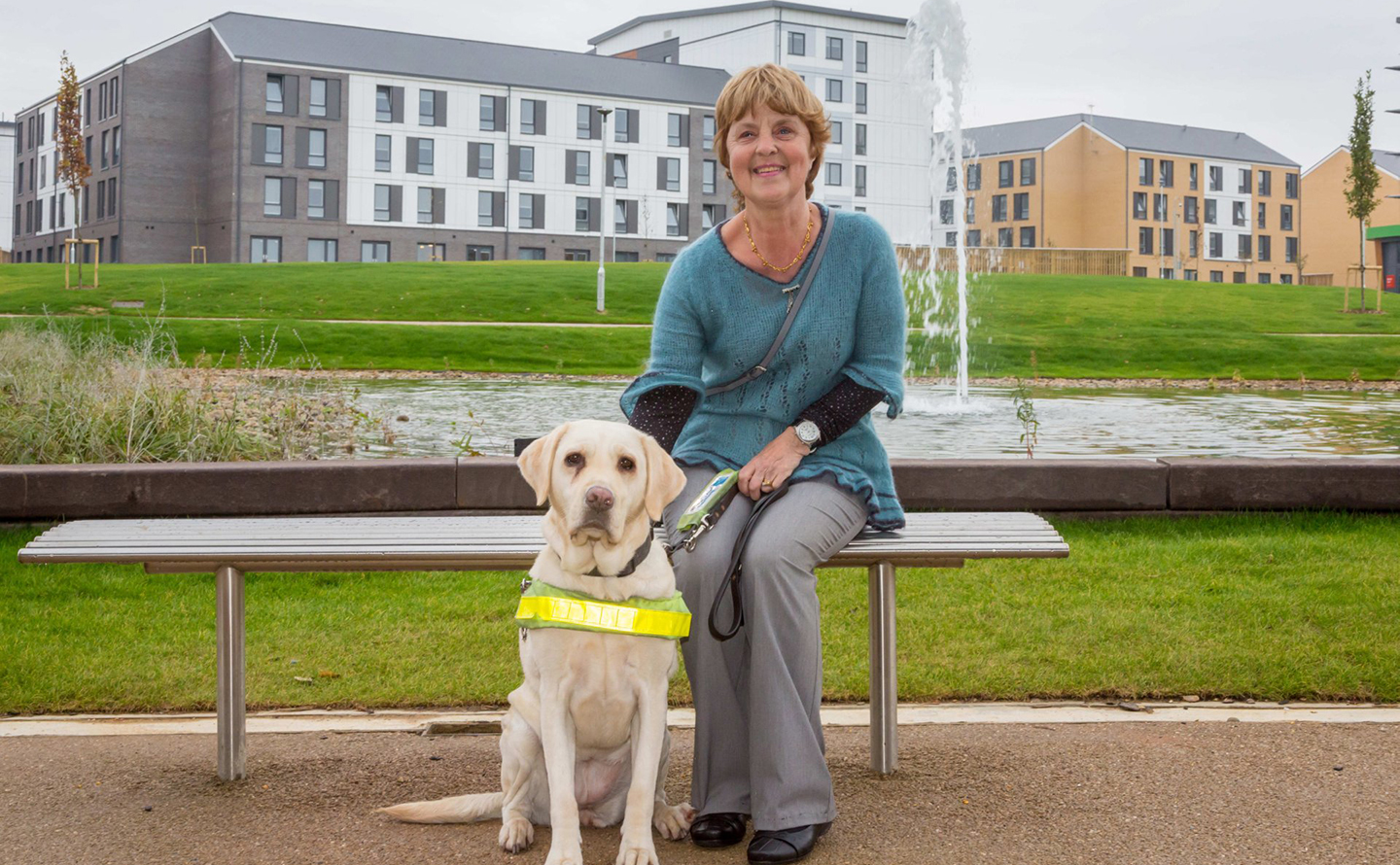 Julia Schofield received a Bachelor of Science Degree with Honours in Computer Science at the Hatfield Polytechnic in 1975. She was the first registered blind female Computer Science graduate in the UK.

Julia had a hugely successful research and business career as a leading technology consultant and she was a champion for utilising technology to meet the needs of people with disabilities. Julia’s work was rewarded with the Women of the Year Frink Award in 1982 and an MBE for services to the computer industry in 1992.

Julia remained connected with the University throughout her life and was awarded an Honorary Doctor of Science in 2007. In 2016 Julia officially opened Schofield Court, a new student accommodation block on the College Lane Campus, named in her honour. At the event Julia said, “I am lucky because my time at Hertfordshire enabled me to get into a field I really wanted to work in”.

“Julia came to study at Hatfield Polytechnic in 1971 from the nearby Chorleywood College, run by the Royal National Institute of Blind People for girls with little or no sight. She always felt that going to a specialist school was right for her and it certainly equipped her with amazing skills to overcome her disability such as braille, cooking, knitting, and mobility. At Chorleywood she was taught Computer Science by the late Dr Bill Tagg from Hatfield. She was encouraged by him and her headteacher to be one of the very first blind people worldwide to study the subject at degree level. Computer programming was considered a promising profession for blind people, but almost all were men.

I first came across Julia in her second year at Hatfield Polytechnic. To my surprise her tutor approached me and asked if I could read to her as she thought I had a nice voice. Reading aloud coursework and textbooks was one of the adjustments lecturers made to support her. In class we made sure we spoke clearly, avoided visual gestures, and provided tactile diagrams. Julia would write notes in braille on her very sturdy mechanical Perkins Brailler as there were no high-tech aids in those days.

From 1973, Julia was accompanied in class by her guide dog Pam, who most of the time slept quietly, but occasionally would show what she thought of the lecture by yawning loudly. Pam had two weaknesses; roaming when on a free run and swimming. One day I had to collect a very wet and slimy Pam from Hatfield Police Station, my most embarrassing moment ever!

In the 1970s we all used 10 character per second Teletypes for input and output to the computer, which we used mainly for programming. There were no braille terminals or printers, so Julia organised the manufacture of prototypes and wrote software to produce braille output. She later acquired one of the first reading aids, an Optacon. This used a camera to scan the text, with individual letters turned into a tactile impression read by a finger.

Julia undertook industry placements during her studies, and for her second six-month placement Julia went to the very prestigious IBM Hursley. At the time, IBM was the world’s foremost computer company and Hursley was a globally renowned research and development centre. This experience led Julia to secure her first full-time job in 1975 at the National Physical Laboratory (NPL), an internationally important research organisation. There she worked in a group looking at human interactions with computers, in particular on MAVIS, a microcomputer-based aid for people with very limited control of movement. This was way ahead of its time and led Julia to embark on a PhD in Computer Interface Design. Again, Julia was the first blind person in the UK to be awarded this.

After NPL Julia’s career flourished. She formed her own software company, employing many staff, travelling the world, and carrying out consultancy and developing systems, typically involving human-computer interaction for well-known organisations in retail, government and health. Some of her biggest customers were car companies including Volvo, Daewoo and Toyota. For five years, she was also the chair of the British Computer Society’s then Committee for the Disabled.

Julia was a pioneer and an inspiration for women and disabled people, and for Computer Science in general. In 2007 when Julia was awarded an Honorary Doctor of Science by the University of Hertfordshire, Professor Jill Hewitt, former Dean of Computer Science said, “It is our pleasure to associate our university with the many tributes paid to Julia for her ingenuity and skill in helping to improve the quality of life for so many”.

Julia was always a pioneer, with her good humour, charm, drive, and determination overcoming obstacles that would have deterred almost everyone else.”