Our observatory at Bayfordbury was built in 1969 as a teaching facility to support our Physics and Astrophysics undergraduate degrees. 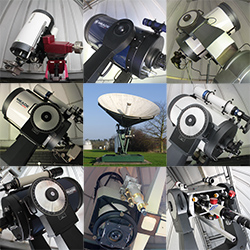 The University of Hertfordshire's observatory is one of the UK's largest and most extensive facilities for teaching observational astronomy.

We have 8 high-quality metal domes - the most of any observatory in the UK, each housing a telescope or number of telescopes. Many of the telescopes are similar and set up with similar cameras and filters. This allows us to keep group sizes smaller during practicals ensuring everybody gets to operate hands-on. Additionally with three of these telescopes running robotically we can multiply the amount of observations we can take each clear night.

Our largest telescope has a 50cm mirror, and was the first telescope to be built at Bayfordbury in 1969. Although no longer used for student practicals, it still offers the brightest views of objects when using an eyepiece, and is the only telescope to be manouvred by hand. 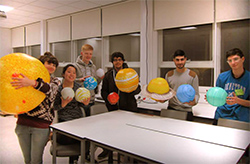 Physics and Astrophysics BSc and MPhys

Within a few weeks of starting your degree you will be at Bayfordbury learning the basics of how to operate the telescopes and cameras. Two training sessions are followed by two further observing sessions, which have included taking colours pictures of galaxies and nebulae, and making a colour-magnitude diagram of stars.

Physics of the Solar System (Level 5)

Learn about the diverse range of solar system bodies and their dynamics, how planets form, their interiors/surfaces and ring systems, planetary and inter-planetary magnetic effects, and the possibilities for life elsewhere in the solar system. Observations of objects in our solar system are made with high-resolution video camera (moon and planets), along with measurements of the orbits of asteroids and comets.

In the past three decades extra-solar planets have moved from science fiction to science-fact, with ground- and space-based surveys revealing several thousand extra-solar worlds. You will have the opportunity to use observations from Bayfordbury to detect these planets and make measurements of the planet and the star they are orbiting.

The module will cover the fundamentals of stars and their structure, including their formation and evolution from the main sequence to final stellar remnants

The study of the structure and evolution of the Universe has in the last few decades undergone a true transformation. The module will cover the mathematical framework needed to describe expanding, curved space-time, and the concepts of Einstein’s General Theory of Relativity as it applies to cosmology.

In the third year you will have the option to conduct your project at the Observatory if this is your area of interest.

You will carry out a piece of research and/or a literature review in a research topic. A successful project will become a feature of a student’s professional profile and CV, and is often a talking point in graduate job interviews and/or postgraduate applications.

Measurements of galactic and extragalactic sources using the Observatory's radio telescopes give hands-on experience with radio astronomy, including the use of the UK's largest teaching interferometer.

Having the largest number of telescopes allows our students the best hands-on experience. Observational practical group sizes are typically 3-4 per telescope, allowing everyone a chance to use the equipment.

Outside of practicals our three robotic telescopes allow observations to be made remotely over the internet. The dynamic queue system allows everything from an interesting colour picture, to hundreds of observations for final year projects to be run automatically. 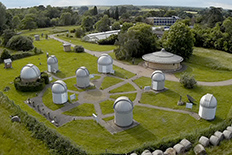 Whilst many university observatories are located on the main campus within a large town or city, Bayfordbury campus is in a rural location, offering darker and steadier views of the universe.

Bayfordbury is 6 miles from the main campus in Hatfield, allowing all of the benefits of a darker, countryside location, but being just a short 15 minute drive away. 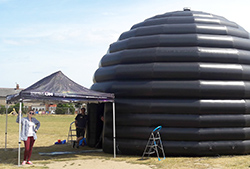 From the Department of Physics, Mathematics and Astronomy we run an extensive outreach programme to spread our passion with the public both locally and further afield. Our outreach events are run predominantly by undergraduate and postgraduate students. At the Observatory we run monthly open evenings between October and March, along with private visits from groups of all ages.

We have three planetariums; a 3m diameter fixed planetarium built inside the Science Building at Bayfordbury. We also have a 6m and huge 10m inflateable planetarium that we can use at open evenings, and take to school and festivals.