David joined the observatory in 2010 after completing his undergraduate degree in Astrophysics at the University of Hertfordshire.

Along with supporting undergraduate observing practicals, David works on special projects at the Observatory including telescope automation and remote sensing instruments.

In addition David is an enthusiastic astrophotographer and has taken many of the images on this website. 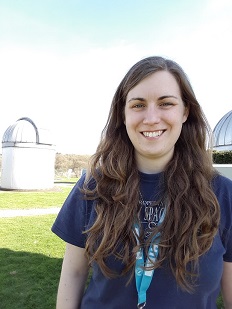 Sam joined Bayfordbury Observatory in July 2016 while completing their PhD in Planetary Science using Raman Spectroscopy to detect biological signatures that had been exposed to simulated martian conditions at The Open University. They have an undergraduate masters degree in Physics with Astrophysics and is a Fellow of the Royal Astronomical Society and a member of the Astrobiology Society of Britain.

Sam is currently working on restoring the Radio Interferometer at Bayfordbury but is also involved in training and supporting undergraduate students at the site and has an interest in exoplanet and low mass objects research. Furthermore, they assist at outreach events including those run at Bayfordbury.

Director of Outreach and Public Engagement 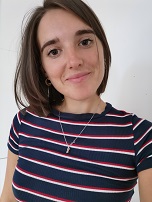 Nuala is the Ogden Trust & SEPnet Outreach and Public Engagement Officer for the Department of Physics, Astronomy and Maths. Nuala joined the team at the end of 2019 after graduating from the University of Sheffield in 2019 with a BSc (Hons) in Physics and Astrophysics. She was inspired to focus her career aspirations on outreach and public engagement during her research of the educational inequalities in physics. This was derived from writing her dissertation on 'Investigating the reasons why women continue in Physics post-16'; the Diversity in the Culture of Physics Summer School; and working in two secondary schools.

Nuala's work at Bayfordbury involves school outreach, public open evenings and supporting public engagement with research and managing the SEPnet Year 3 STEM careers project and the Cosmic Curiosity project, a collaboration between the University of Hertfordshire and Hertfordshire Libraries. 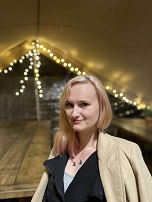 Mily is the Group Visit coordinator and leads our planetarium in schools programme: Cosmos in the Classroom. Mily is a passionate science communicator, with particular skill in making science exciting for children. She joined the outreach programme at UH during her undergraduate degree in astrophysics and now leads two outreach programmes. She is currently studying for her Masters in Space Science. Mily also helps out with other school-based outreach events and Public Open Evenings at Bayfordbury.

Jessie is interested in Chemigrams, which is a camera-less medium involving capturing the chemical reaction on photographic paper. These are neither photograms nor photograms, as the light or shadow does not form the image, but instead becomes an active force during the chemigram's making, leaving a trace or a mark. Although this process involves photographic material, Jessie uses this technique to create marks on a surface made by the fortuitous nature of the medium. See more of Jessie's work.

Reggie spent her residentship adorning the Bayfordbury campus with homemade pinhole cameras and exposing them for many months at a time to capture the movement of the Sun. In January 2012 one of her first Bayfordbury 'solargraphs' was chosen as NASA's Astronomy Picture of the Day.

As principal technical officer and accomplished astrophotographer, Bob transformed Bayfordbury over his 26 years of service.

In 2012 he was made a fellow of the University.

Chris began working at Bayfordbury in September 1971 and is currently Professor Emeritus at the University of Hertfordshire and a freelance writer of astrophysics text books. From 1983 to 2001 he was Director of the University's Observatory at Bayfordbury and from 1996 to 2001 also Head of the Division of Physics and Astronomy.

He took early retirement in 2001 in order to concentrate on his writing interests and the sixth edition of his widely used 'Astrophysical Techniques' was published in December 2013.

Chris has written 14 books as sole author and contributed to another dozen or so, as well as writing hundreds of articles covering interests ranging from popular to specialist research. In 1997 he was awarded the title of Professor of the Public Understanding of Astronomy.

Proposed that the University offer a Astronomy  Course and suggested there should be a site for practicals, hence Bayfordbury Observatory was born.

Lou Marsh, as he was universally known (his actual name was Julian Caryl Dowsett Marsh - the nickname arose from a childhood inability to pronounce "Julian”), joined what was then Hatfield College of Technology as a lecturer in the Department of Electrical Engineering in the mid-1960s. Lou had been a keen amateur astronomer for many years and soon after his arrival at Hatfield, he was offering courses in introductory astronomy in addition to his main task of lecturing on radar engineering. This was a period of rapid development in further and higher education and Lou saw the opportunity to expand his astronomical interests. In 1967 he proposed that the college add astronomy to its portfolio of subjects and build an observatory. Sufficient funds were made available to build a substantial dome at Bayfordbury, some 10 miles away from the main college, and to purchase a 0.4 m telescope. The observatory was opened in 1970 and Lou was appointed Head of Astronomy and Director of the Observatory at what by then had become the Hatfield Polytechnic. He was joined by Iain Nicolson as a lecturer in astronomy and transferred from Electrical Engineering to the Department of Mathematics.

In the meantime, while he was researching for his MSc, Lou had spent a year at the University of Leicester where his work on the early wire grid infrared polarimeters and detectors laid the basis for his and his institution's major research interests in polarimetry — the latest version of the Hatfield polarimeter is in regular use on the 8 m Subaru telescope, among others.

Over the next few years Lou led the astronomy group in developing both the observatory and the astronomy courses. Several telescopes were added and the original 0.4 m telescope upgraded to 0.5 m. By the time that Lou retired in 1987, mainly on health grounds, astronomy could be taken as a complete undergraduate degree, there was a part-time MSc in astronomy and astronautics and a thriving research group. During these 17 years he also served on committees of the SRC, CNAA, RAS and BAA. After retirement Lou continued to lecture occasionally at what is now the University of Hertfordshire, where he was awarded an honorary MSc and was appointed a Visiting Fellow in the Faculty of Natural Sciences. He continued with his astronomical interests, publishing on lunar photography and radio emissions from the solar corona until shortly before his death in 2004.

Mark Gallaway joined the Bayfordbury Observatory staff in 2011 after completing his PhD in massive star formation at the University of Hertfordshire. He has an undergraduate degree in Physics and is a Fellow of the Royal Astronomical Society and a member of the Institute of Physics.

Mark held an Ogden Public Engagement Fellowship and is involved with primary and secondary schools with the aim to improve scientific literacy within the classroom.

Stuart was the Director of Public Astronomy Education at the University of Hertfordshire until 2001 when Stuart decided to increase his part-time writing to a full-time occupation.

He remains a Visiting Fellow promoting the University and contributing to observatory open nights.

Having crossed from mainstream science into science journalism, he now spends his working life translating astronomy, space research and physics into comprehensible language for the general public. Find out more about Stuart's work.

Nik is a leading amateur astrophotographer who was awarded the Amateur Achievement Award of the Astronomical Society of the Pacific in 2004 and was the first UK recipient of this prestigious award.
See details of Nik's work.

Robert was a polymath, his day job was that of a prolific research scientist who had a deep involvement with Bayfordbury Observatory.

In 2009, Robert wrote, co-produced, co-directed, edited and composed music for the educational film drama The Starry Messenger to celebrate the International Year of Astronomy. Discover more about Robert's life.

David was a leading expert in the field of astronomical polarimetry and the phenomenology of active galactic nuclei.

Iain joined the newly-formed astronomy group as a lecturer in 1969, becoming Senior Lecturer in 1978 and Principal Lecturer in 1991. He was Unit Leader for Astronomy in the Combined Modular degree scheme. He took early retirement in 1995 and is currently a writer and lecturer on astronomy and space science. Author of more than 20 books, he has also contributed chapters and entries to a wide variety of books and encyclopaedias, and has written hundreds of magazine articles.

While at the University of Hertfordshire he was a founding member of Astronomy Now magazine and AstroFest and was a frequent contributor to BBC Television’s, The Sky at Night.

He was was made a Fellow of the University in 2011.

Mike first visited the then fledgling Observatory when he was 14, and returned many years later to undertake an MSc, working with Chris Kitchin, and subsequently his PhD, with Jim Hough. In a seminal paper in 1993, Mike was revealed as the discoverer of the first radio galaxy (IC5063) to have “hidden broad lines,” a key aspect of the now-familiar unified model of Active Galaxies.

During his time at the Observatory, Mike participated in all public outreach events and was instrumental in re-starting the Friday night public lecture courses.

In 1994 Mike went to Warwick University to develop the astronomy teaching labs, but returned back to Bayfordbury in 1997.

In 1999 he moved to the US, and started a new position at Princeton University, before moving to New York where he is currently Professor of Astronomy & Astrophysics at the State University of New York.

Following the tradition of past Observatory faculty, Mike has written over 10 books on astronomy both for the amateur astronomer as well as undergraduate astrophysics students.

Find out more about the observatory and what we do