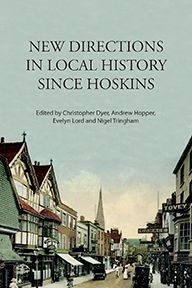 “This book is an analysis and interpretation of the nature of local history fifty years after the publication of W.G. Hoskins’ Local History in England in 1959. It is a thought-provoking, intellectually stimulating book from the Centre for English Local History, Leicester, and the British Association for Local History. It is well produced by the University of Hertfordshire Press and at £16.99 an attractively-priced paperback.”

“All the essays in this volume are detailed, scholarly explorations of local or regional themes. Those by Chris Lewis on local history between the wars, and Ruth Paley on the King’s Bench (crown side) are the two most likely to be cited repeatedly. Both illustrate local history at its best.” HR French, Agricultural History Review

Local history in Britain can trace its origins back to the sixteenth century and before, but it was given inspiration and a new sense of direction in the 1950s and 60s by the work of W.G. Hoskins.

This book marks the fiftieth anniversary of the publication of his Local history in England which was designed to help people researching the history of their own villages and towns.

It is the result of a collaboration between academic historians in the Centre for English Local History at the University of Leicester, which Hoskins founded, and the British Association for Local History, an organisation that brings together the thousands of people who are not professional academics but who practise local history.