Active nuclei in galaxies typically contain a very massive black hole. Their outbursts can be energetic enough to disperse the entire host galaxy. This energy couples poorly to stars, but quite well to gas. In the case of jets from the ubiquitous super-massive black holes, the energy transfer is mainly via radio lobes, big bubbles inflated by the jets. The effect of such outbursts is different for different phases of the interstellar medium: In general, cold and dense gas tends to get compressed and form stars, whereas hot and tenuous gas tends to get even hotter and escape the system. This produces broadband observational effects. We aim to decipher these observational signatures by reproducing such systems or aspects thereof in hydrodynamics simulations and comparing the results to the observations. This promises insight into nature and vicinity of the black-holes, as well as their role in galaxy evolution.

The image shows a 3D mesh-refining simulation of a jet in a disc galaxy. The jet compresses and cools the interstellar medium in the disc galaxy, roughly doubling the star formation rate.
Gaibler, Khochfar, Krause & Silk, MNRAS 425, 438–449 (2012)

Simulation of jet-induced star formation in a gas-rich galaxy. These are volume renderings of the inner part of the 3D simulation cube. The dense gas in the disc galaxy has blue to light green colours, low-density gas associated with jets and lobes is in yellow and red, and bow shock into the hot gaseous halo surrounding the galaxy appears in bright green. The right image is 6 million years later than the one on the left.

Star-formation is associated with explosions of the short-lived massive stars as supernovae. Because massive stars are usually formed in clusters or associations (lower stellar density), their effect also combines and produces superbubbles. The superbubbles are much bigger (up to kpc) than bubbles produced by individual stars. Important questions include, how much energy is radiated away, how much is used to move and accelerate gas and how many stars are formed by the compression of surrounding interstellar medium. Superbubbles are the building blocks for the structure of the interstellar medium on larger scale. The image shows the emergence of a superbubble driven by three massive stars.
Krause et al., A&A 550, A49 (2013) 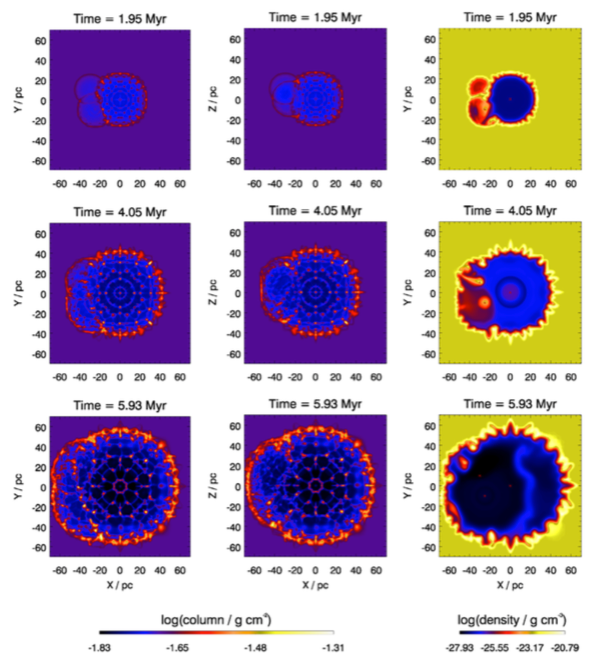 Simulation of emerging superbubble. Only the first 6 million years of the simulation are covered. See Krause et al., A&A 550, A49 (2013) for more.

Superbubbles also overlap and merge. The result is either a low-altitude circulation within the galactic gaseous halo, or a supersonic wind. The image shows a simulated disc galaxy where the interstellar medium is driven by superbubbles. In the centre, the explosion-rate density (and therefore star-formation-rate density) is high enough to trigger the supersonic wind.
von Glasow, Krause et al., MNRAS 434, 1151 (2013)

Onset of a galactic wind in a Lyman break (small, high-redshift, star-forming) galaxy.

Massive star clusters are unique stellar systems, because we can observe them now in formation in nearby galaxies, as well as when they are very old, as globular clusters in the Milky Way halo. Both phases reveal unique clues to about star formation and energetic outbursts in these systems. They seem to be key players in driving galactic winds and hence of general importance in strongly star-forming galaxies. It is known that massive star clusters lose their gas a few Myr after formation. It is, however, a puzzle if this is due to strong energy input, maybe related to very massive stars, or a resulting intermediate-mass (about 10,000 solar masses) black hole, or due to consumption of the gas by star formation. Fast gas expulsion could in principle lead to a dissolution of the star cluster, or a strong reduction of its mass. The plot shows an assessment of observed star clusters in a metallicity versus compactness plot. The lines refer to theoretical models of gas expulsion. To the right of a given line, we would expect that the self gravity of the gas is too strong for fast gas expulsion to occur for the given model assumptions. We find that for some massive star clusters, fast gas expulsion can be reasonably excluded.
Krause et al., A&A 587, A53 (2016) 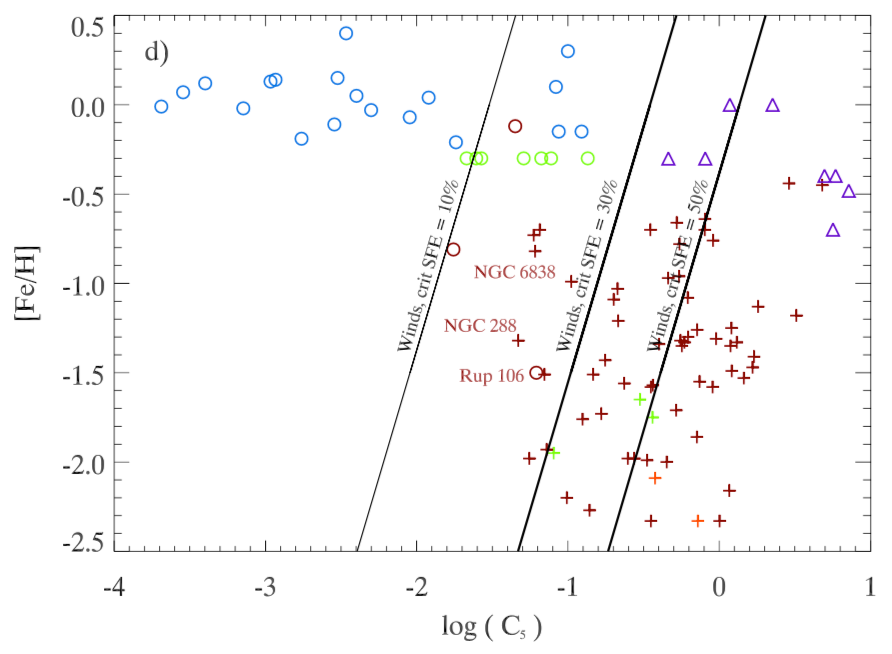