The airfield at London Colney

The airfield at London Colney.

London Colney airfield, which is now a cornfield, was located between the old Shenley Hospital and current Harperbury Hospital sites, north of Shenley village (illustrated above). In 1917, it was home to 56  Squadron who operated SE5A fighter  aircraft which flown by young Royal  Flying Corps (RFC) pilots in their  early twenties.

One such pilot was the famous Captain Albert Ball VC, DSO and MC who, as one of World War One's Fighter Aces, developed his tactical airmanship skills whilst based there. Other Air Aces based at the airfield, included Mannock and McCudden, all of whom lost their lives during the War.

For more information on  the Landing Grounds of Hertfordshire, please contact Guy Thomas 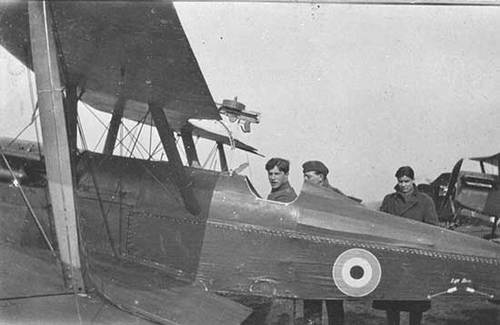 Contact us if you are interested in getting involved in Remembering the First World War. New participants are always warmly welcomed.

Explore the role of performing arts during the First World War in the Heritage Hub'sWorld War I Theatre project.