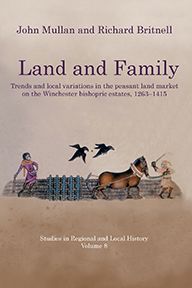 Trends and local variations in the peasant land market on the Winchester bishopric estates, 1263–1415

“An impressive study. Its generalizations about broad patterns are compelling ... its local case studies enhance our understanding ... It should offer a welcome stimulus to research on the medieval peasant land market.”

Medieval peasant families are closely identified with the land to which they had a hereditary right, especially in periods of land scarcity. By contrast, historians in recent decades have become increasingly interested in the growing facility with which even servile tenants could exchange land, especially from the thirteenth century onwards.

This book concerns the tension between these contrasting trends in the study of village life, showing how they were affected by changes over time and place.