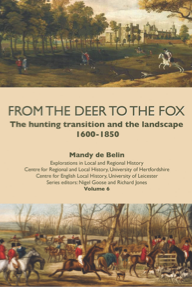 From the Deer to the Fox

“This meticulously researched and much-needed study explores the shift from deer- to fox-hunting from the early seventeenth to the mid-nineteenth century and its effects on the landscape of Northamptonshire.”

“This is a well argued volume which breathes new life into the debate surrounding the transition between one sport and another.” Deer Journal

“The complex web of human-animal relationships, played out over radically changing landscapes and an equally unsettled social geography, are the context for this... well-written study.” Jonathan Finch, Rural History

Between the seventeenth and nineteenth centuries the sport of hunting was transformed. The principal prey changed from deer to fox, and the methods of pursuit were revolutionised.

The traditional explanation of the hunting transition has aligned it with change in the landscape: disappearing woodland and increased enclosure led to decline of the deer population. Attention turned to the fox out of necessity.

This book questions the traditional account by looking at the landscape of Northamptonshire. The county contained the archetypal landscapes of both the 'old' and the 'new' forms of hunting; if landscape-driven change could be detected anywhere, it should be there.