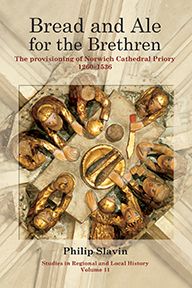 Bread and Ale for the Brethren

The provisioning of Norwich Cathedral Priory, 1260-1536

“This is another fascinating volume in University of Hertfordshire Press's laudable series of affordable local studies.”

“By making empirical academic scholarship available at an accessible price, University of Hertfordshire Press provides an important service to local and landscape historians, many of whom do not enjoy easy access to university libraries. In the eleventh volume of their series 'Studies in Regional and Local History', Philip Slavin deploys an impressive number and range of documents to investigate how Norwich Cathedral Priory (which, in the early fourteenth century, housed approximately sixty monks and 240 lay brethren and staff) met its enormous requirement for bread and ale, the bedrocks of the medieval diet.” David Stone, Landscape History

“This highly detailed study will be of particular value to readers with interests in medieval economic history, Norwich cathedral and its estates, or simply wanting to know more about how medieval monks organised their supplies of bread, ale and other provisions.” John S Lee, The Local Historian

“This book is about the production and consumption of arable crops by a large monastic institution, Norwich Cathedral Priory, in the later middle ages. It demonstrates the exciting and satisfying results that can be achieved from a thorough and expert analysis of a relatively complete archive, especially when the author is testing various theoretical perspectives against the empirical evidence.” Christopher Dyer, Economic History Review

“An extraordinary piece of research. This is a strongly recommended resource because it has wider applications than its seeming central purpose. Clearly it says a great deal about medieval Norfolk but what it reveals should also provide a template for those who are interested in the way that large and small religious houses elsewhere also organized their supply chains.” Historical Association

By 1300, England and other West-European countries had undergone a significant degree of commercialisation. More and more communities, both urban and rural, depended on an efficient network of local markets to obtain the goods they needed, in particular for their food.