The power of architecture to influence learning cannot easily be overstated.  School design has the potential to impact positively on children and young people’s educational experiences with research findings indicating that the physical environment where students learn makes a difference to their experience of learning and educational outcomes (Saint, 1987; Tanner, 2009; Gislason, 2010).  The capacity of visual and built forms to affect human action and interaction has implications for architectural vision and informs this thought piece’s examination of the relationship between school design and learning.  It is co-authored by Michele Lloyd, School of Education, and David Lloyd, her father, an Architect educated at the Architectural Association in London. Following one year in New York and four years in Chicago, David returned to England and worked for 14 years at London Boroughs before spending nine years at Hertfordshire County Council and 14 years at the Architects Co-Partnership (ACP) in Hertfordshire.  Firstly, a brief contextual backdrop regarding post-war Hertfordshire is given followed by an in-depth look at David’s more recent school designs in Hertfordshire.

In post-war Britain, Hertfordshire played a key role in school design breaking with the past (Burke, 2010). Hertfordshire had hitherto not had a county architects’ department and schools had been primarily built by surveyors. With significant numbers of the population moving out of London to areas in Hertfordshire such as Hatfield, Welwyn, St Albans, Hemel Hempstead, Letchworth, Stevenage, Watford and Oxhey, school building took on a sense of urgency. John Newsom, the county’s Chief Education Officer, helped to pioneer school building in Hertfordshire in collaboration with Herbert Aslin, Chief Architect, Stirrat Johnson-Marshall, his deputy, and progressive architects Mary and David Medd, as well as others.  Seeing and imagining the school environment from the subjectivity of the learner became an integral design principle: ‘What the Herts architects did was to start from the perceptions of the child’ (Saint, 1987: 87). Through advocating that architects spend at least a week in school observing students and teachers to inform school design, Newsom helped to forge interprofessional relationships which ‘for the first time brought architects and educators directly together in dialogue’ (Burke, 2010: 75).

Hertfordshire became the national leader in post-war school building. It developed the 8 feet 3 inches module which, due to its cost effectiveness, speed and adaptability, became the school building model for the rest of the country. The 2 feet 8 inches system (a typical door size) was subsequently developed by Hertfordshire and St Albans College of Further Education was designed to this dimensional system, part of which remains a listed building today. The Building Research Station (now Establishment) was already conveniently located in Garston near Watford, whose research and development contributed to school design. Pedagogically progressive design principles promoted at Hertfordshire, such as adaptable configuration of learning spaces and decreased amount of corridor space, were adopted by the Ministry of Education and influenced design in Europe and the USA (Saint, 1987).

School designs commonly reflect the forms of knowledge at the time they were built (Emmison and Smith, 2000) and as building techniques developed and the urgency of post-war reconstruction ebbed, more traditional forms of construction came to the fore to meet particular design briefs. Just as the work of post-war architects in Hertfordshire emphasised that ‘decent architecture should be available to all in fair shares’ (Saint, 1987: 111), so David has been concerned with advancing educational opportunity through his school designs. It is to how David brought his vision to bear on his more recent designs that attention shall now turn.

Having been involved in a number of projects across the primary and secondary age-phases, the focus here is on the five buildings David designed, while at ACP, for Parmiter’s School, a co-educational state comprehensive in Garston. The first project in 2004 was the Modern Language Department with six sound-proof classrooms to prevent noise transference. This was followed by the Music Centre with a recital room, the walls of which have an acoustic quilt to absorb sound, achieving a level of acoustics suitable for small concerts. Below is an artist’s impression of the Music Centre.

The stimulus for the double-height window design was the building’s south-facing orientation since better daylighting has been found to improve performance, especially in reading, and increase teacher and student buoyancy (Saint, 1987). Light fittings providing non-directional light were selected to diminish glare.

Next, David designed the Sixth Form Centre followed by the Drama Centre which was the winner of the Hertfordshire Association of Architects Civic/Community Building Award in 2009. The photograph of the Drama Centre below shows how the building, facing just west of due south, casts interesting shadows. It also shows the window benefitting from a brise soleil to reduce sun glare and sun heat on the glass of the window, while retaining an external view as research reveals that being able to see outside can positively affect learning (Tanner, 2009). Research findings in post-war Hertfordshire which ‘set a premium on the value and quality of direct daylight over and above its sheer quantity’ (Saint, 1987: 88) have continuing school design resonance today. 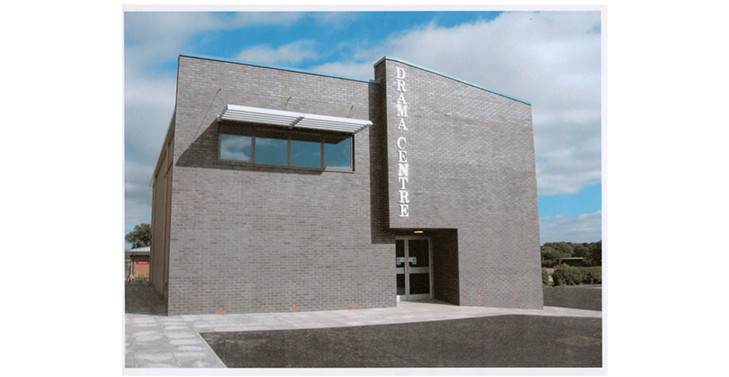 Taking into account the design brief, David incorporated a gantry walkway at mezzanine height used for drama productions as well as access for controlling specialist lighting. The school wished to have a very dark blue as the colour of the walls in the main studio since this helps when spotlights are used. In other spaces, David opted for a mid-blue for the exposed steel frame and a lighter blue for walls; when seen together, the different shades harmonise in proportion.

The final building designed by David at Parmiter’s School was the two-storey, eight-classroom Maths block in 2011. Measuring 18m x 18m it has a 2m square opening in the roof for a 2m pyramid rooflight filtering in additional natural light. The opening was designed to transform from an octagonal space up to a square rooflight using a 45 degree ceiling, in eight sloping sections, which converts from an octagon to a square. The head of the Maths department, in conversation with David, commented on the appropriateness of having a geometrically constructed ceiling in a Maths block. 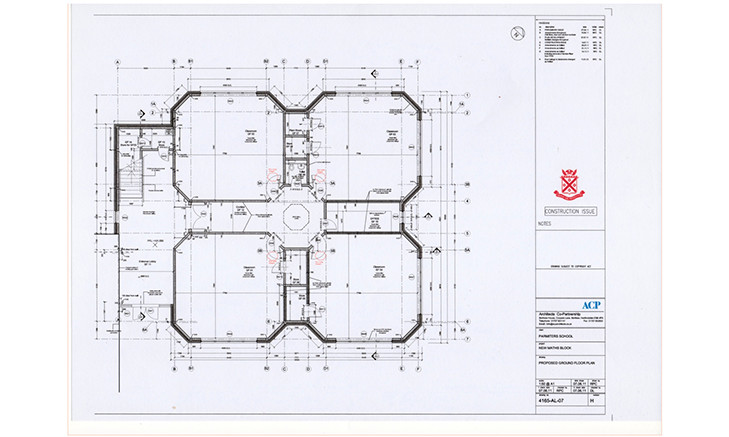 In relation to the stairwell, on the left of the plan, the building regulations were pushed to the limit since the maximum area served by one staircase was reached. Managing to have just one staircase in the building provided more teaching room and space for staff. In the Maths block no one classroom is next to another therefore preventing sound transference. Each classroom has a store room and there is a staff work room. Importantly, there is also a dedicated staffroom which represents a particularly cherished collective space for teachers at the current time of increasing loss of staffrooms due to the marketisation of education (Berry, 2016).

As the drawing above shows, David was able to slice off the corners of the building and configure recesses to achieve a coherent, continuous perimeter form creating striking shadows, highlighted in the photograph below. The shallow roof pitch together with triangular eaves add to the casting of interesting shadow formations. The 45 degree, elegant pyramid rooflight is visible too.  On David’s recommendation, staff positioned the school crest in the focal recess. The image below shows the Maths block perpendicular to the Drama Centre and their juxtaposition demonstrates the contrasting colour bricks.

The entrance to the Maths block, on the left-hand side, is a double-storey atrium allowing increased natural light, ventilation and visual sensation of space. Significantly, an overcrowded school environment has been shown to negatively impact on student learning (Tanner, 2009). The double-height entrance funnels through to lower ceilings and, on the first floor, opens out once more into the aforementioned octagonal-pyramidal light well. The different ceiling heights achieve a dramatic use of space befitting the aim of school architecture to harness the three dimensional design of space for an enhanced learning environment. An added ability of good design is the generation of the feel good factor which elevates a composition above ordinary buildings into a piece of architecture.

The principle of viewing and imagining the school environment from the perspective of learner and teacher is embodied in David’s architecture. Exploring his designs suggests that ‘vision’ can be realised as a sensory experience (Burke, 2010). The impact of humane, social architecture seeks to live on beyond the classroom walls and, to this end, enhance lives.

Several of the designs by David and ACP were funded through the Building Schools for the Future (BSF) programme established in 2003 under the Labour Government to provide substantial new investment for primary and secondary schools, advocating the view ‘School buildings should inspire learning’ (Department for Education and Skills, 2003: 1). Regrettably, the BSF programme was terminated in July 2010 following the formation two months earlier of the Conservative-Liberal Democrat Coalition Government, yet the legacy of inspirational design will not fade. Many schools are indebted to the post-war pioneers at Hertfordshire and it is possible the new BA (Hons) Architecture, commencing at the University of Hertfordshire in 2016, will contribute towards future school design. Of course, school design is but one constituent among many interrelated factors making for a complex school environment (Leiringer and Cardellino, 2011). Non-architectural features such as government policy, school culture, leadership, educational practice and resources are found to be interacting components contributing to a school’s overall learning environment (cf. Gislason, 2010). School architecture can best play its role in educational transformation in tandem with transformative attitudes whereby every member of a school’s learning and teaching community is both valued and feels valued.