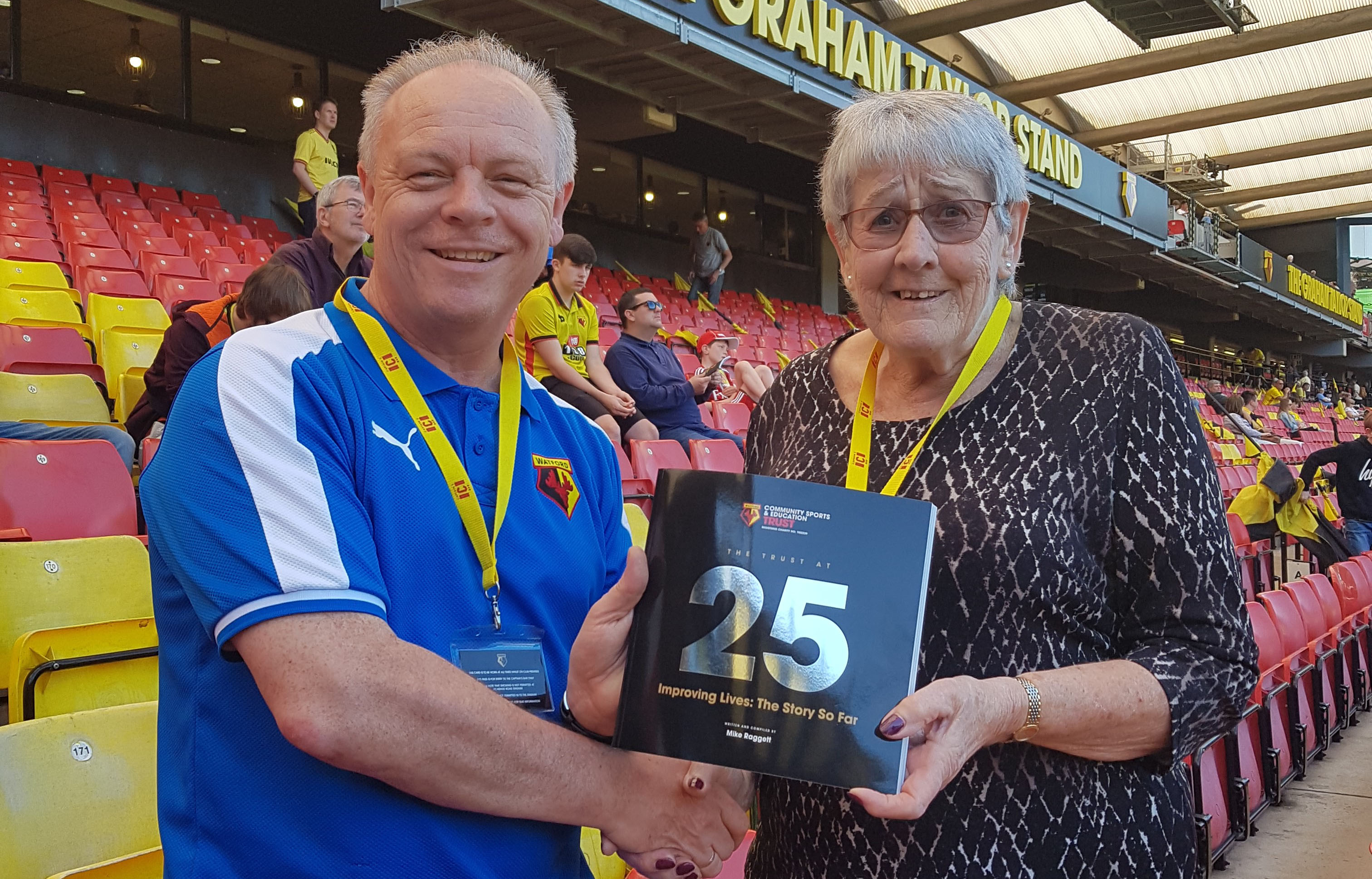 The 2017/18 season saw the 25th anniversary of the first full-time Community Officer being employed at Watford Football Club.  The Trust applied for and was successfully awarded a grant of £55,000 by the Heritage Lottery Fund. A commemorative book, a new interactive website and an exhibition at Watford museum have all been delivered as a result of the grant.

A team of volunteers were recruited at the start of the project and with great support from the University of Hertfordshire, oral history training was delivered in April 2017. Once trained the volunteers conducted over 70 interviews with past players, beneficiaries of the Trust’s projects as well as past and present employees of the Trust. All of the interviews were transcribed and proved extremely valuable not only for the commemorative book but also for the museum exhibition and new website. The project has given Watford FC a comprehensive history of its community outreach work as well as capturing its rich heritage in this area. A database of memories has been built up which will prove invaluable as a research resource for future use.  The new skills acquired in oral history have also given our volunteers an experience they have all found rewarding and some have now become volunteers at Watford museum.

The oral histories include those of Ann Swanson, a legendary figure among many supporters who are now in their mid forties, but still cherish their memories of Ann as the founder of the family enclosure and leader of the Junior Hornets. Ann had moved away from the area and after some great detective work by one of our volunteers, was traced to a village in Cambridgeshire. Although now in her eighties, and suffering ill health, Ann drove to the Vicarage Road stadium and astounded the audience who asked to sit in on the interview, with heart-warming stories of Junior Hornet trips to away games, inviting a player home for tea who ate her out of house and home, and letting another lodge for a week who stayed on for months! She attended a Community Day event and had a long queue of grown up Junior Hornets reminiscing, and amazingly she remembered them all.

Jack Wood, who attended many of the Trust’s coaching courses even persuaded his parents to break their annual holiday so that he could take part in a Trust football tournament. He told a lovely story of how the Trust were invited to take part in a football coaching scheme at Legoland, but weren’t told until they arrived that it was a special event as the coach was none other than French World Cup winning captain, Zinidene Zidane.

A lot of the memories relate to how the Trust shaped people’s lives and gave them opportunities to develop. The commemorative book has a whole chapter outlining stories of individuals such as Nick Perchard, who started as a coach for the girls team and is now Head of Community for the Premier League.  Others such as Anthony Burton speak about how the Trust helped them into employment and developed their self-confidence.

You can access the summaries and recordings of all of the 25th Anniversary interviews in the Oral History Archive.