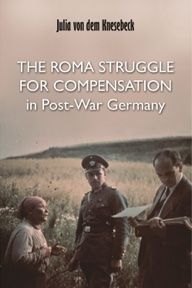 The Roma Struggle for Compensation in Post-War Germany

“The first-rate research adds to the prestige of the University of Hertfordshire’s ongoing series on the Roma during the Holocaust. We need similar works on the Roma throughout German-occupied Europe.”

Thirty years passed before it was accepted, in West Germany and elsewhere, that the Roma (Germany's Gypsies) had been Holocaust victims. And, similarly, it took thirty years for the West German state to admit that the sterilisation of Roma had been part of the 'Final Solution'.

Drawing on a substantial body of previously unseen sources, this book examines the history of the struggle of Roma for recognition as racially persecuted victims of National Socialism in post-war Germany.

Since modern academics belatedly began to take an interest in them, the Roma have been described as 'forgotten victims'.

This book looks at the period in West Germany between the end of the War and the beginning of the Roma civil rights movement in the early 1980s, during which the Roma were largely passed over when it came to compensation. The complex reasons for this are at the heart of this book.