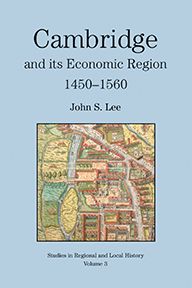 Cambridge and its Economic Region

“Lee offers a meticulously well-judged analysis of the town's relationship with both the surrounding countryside and more distant points of contact.”

“Lee's study is notable for its thoughtful and sensitive use of a wide range of sources ... [this study] will be of interest not only to historians of Cambridge and its region but also to those concerned with the role of towns in the development of regional economies in the middle ages and beyond.” Ben Dodds, University of Durham

“Translating a Ph.D. dissertation into a book is no mean task, but John S. Lee has achieved the feat admirably. The book is clearly and methodically presented, in an easy-to-read narrative way.” Michael Potterton, Journal of Economic History

“Throughout the book the author explores the economic relationships between country and town... The analytical approach is admirable: if it can be counted, tabulated and mapped, then it is. Rarely can a solid doctoral thesis have been presented to the public in a more accessible form.” Alan Dyer, English Historical Review

Using taxation records and details of purchases made by the Cambridge colleges and other institutions, a picture of the town’s trade emerges and the population and wealth of Cambridge and other towns and parishes are compared.

The University expanded considerably through the fifteenth century and new colleges were founded, all adding to the thriving local economy. The extent to which trade with London stimulated the development of the malt, barley and saffron trades during the later fifteenth century is analysed.