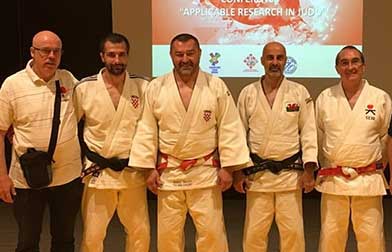 The mission of the International Judo Research Unit is to benefit society through the development of high-quality evidence-based understanding to impact on the management, coaching and practice of the way of judo.

The research unit is engaged in research, consultancy, knowledge transfer and training.

There are six PhD projects currently in progress impacting on understanding at the highest levels of judo.

Judo as a method of moral and intellectual development and its effect on children in the schools of Croatia. Slaviša Bradić

Slaviša is a member of the International Judo Federation Military and Police Commission, an IJF kata judge, and a kata instructor for the IJF Academy. For the Croatian Judo Federation he is Head of the Kata and Belt Commissions, Member of Committee for School Sport, and selector for the kata national team. His book on Self-Defence is the official textbook for the IJF Academy for the police. Nationally he is a Member of the Croatian School Sport Federation, creator of the project "Judo in schools", and Head Coach in Judo Club ''Rijeka''.

George was the National Coach for Greece at the 2012 and 2004 Olympic Games, and is the former National Judo Coach for Wales. From 1989 - 2015 he was President and Head Coach of the Budo Center Judo Club of Neo Philadelphia in Athens, Greece. As a young judoka, he lived and trained at Tsukuba University in Japan.

The impact of the competition rule changes on the result of the bronze medal fight in international judo. Geert Claes

Geert is a coach at Koninklijke Judoclub Lebbeke-Wieze, and a graduate of the European Judo Union Level 5 Coach Award at Anglia Ruskin University. In 2017 Geert presented at the 50th Anniversary Conference of the Japanese Academy of Budo in Osaka, Japan.

An analysis of the impact of socio-economic conditions on the performance of black judo players in South Africa. Temba Hlasho

The application of Kōdōkan judo techniques within the IJF World Tour, Tokyo 2020 Olympiad, and the implications for the teaching of judo. Florin Daniel Lascau

Daniel Lascau is Sport Director of the International Judo Federation, and coach at the IJF Academy. He is the former General Secretary and Sports Director of the European Judo Union, and President of the Romanian Judo Federation. He became World Champion in 1991 and competed for Germany in the Barcelona Olympic Games

From beginner to winner: The application of constraints-led interventions in judo. Darren Warner

Darren is Chief Executive of the Welsh Judo Association. He was a Great Britain Performance Coach for the London 2012 Olympic Games, and national coach for eight years. He led Great Britain to three medals at the 2008 World Junior Championships, their biggest highest medal tally of the last twenty years. Among the many athletes he has worked with are double Paralympic medallist Sam Ingram, London Olympic silver medallist Gemma Gibbons, and Commonwealth Champion and world number 1, Natalie Powell.

The leader of the i-dōjō International Judo Research Unit is Dr Mike Callan.

Mike is a Principal Lecturer in Sport Development and Business at the University of Hertfordshire, and a European Judo Union Didactic and Scientific Expert. He has extensive experience of providing coach education and consultancy around the world. He is the President of the International Association of Judo Researchers and Secretary General of the Commonwealth Judo Association. Previously he was the International Federation Services Group Leader for Judo for the 2012 Olympic and Paralympic Games, and Chief Executive of the Judospace Educational Institute. His PhD relates to support for judo players in an educational environment. He is a 7th Dan and was awarded the International Judo Federation Special Award for his services to education and research. His recent publications include The Science of Judo published by Routledge.

A number of academics contribute significantly to the success of the i-dōjō:

From University of Hertfordshire:

Contact Dr Callan for further information about the i-dojo.