Rosemary Phillips is a member of the Public Involvement in Research group at the University of Hertfordshire. She shares her personal reasons for contributing to dementia research and explains why she feels it is a privilege to be involved. 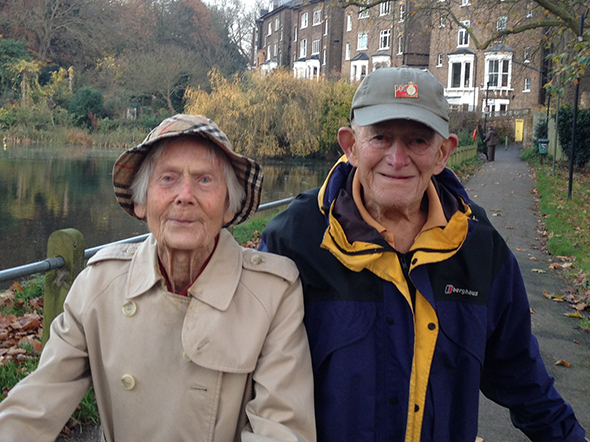 My parents were young adults during World War II, which very much shaped their lives. My father served in the Merchant Navy, where at the age of around 19 he was sunk three times, each time off the coast of Africa, from where his ship was bringing produce such as wood, tin and cocoa to Britain. My mother was a secretary in Barclays Bank and, as a reserved occupation, saw out the war years from her office in Trafalgar Square; alongside that she served as an air raid warden.

My parents met after the war, with my father working for many years as a clerk for British Rail and my mother continuing as a secretary until I (their only child) was born. They were an active couple who loved walking in the countryside, both near home and on holidays further afield.

They continued their active lifestyle into their retirement, with my mother at age 90 well able to do a 10-mile walk and my father (who was a little younger) more than able to do the same. At around age 92, my mother fell and broke her wrist, which knocked her confidence in her walking. As she slowed down, so the symptoms of dementia (Alzheimer’s) started to show. My father subsequently had a couple of TIAs (mini-strokes) which led to a diagnosis of vascular dementia.

I spent some years supporting my parents and helping to enable them to remain independent in their own home. This included helping them get to medical appointments, supporting them to manage their finances, and taking them shopping and out to places that they could no longer access by public transport. They both remained as physically active as they were able to. That and a healthy diet were, I am sure, key factors in their dementia remaining mild and them being able to keep their independence. That is why I am so keen to see research into physical activity for people living with dementia.

I explored what the Alzheimer’s Society could offer and, while reading their information, discovered that they were after Research Network Volunteers to review applications for funding for Care and Biomedical related research from a lay perspective. That appealed to my scientific (although unrelated) background – and it has given me much satisfaction to be a part of the process of advancing dementia research.

Through this involvement, many other opportunities arose, both within the Alzheimer’s Society and connected directly with various universities. One of these has been my joining the Public Involvement in Research Group (PIRg) at the University of Hertfordshire. This group of individuals – all with an interest in public health, and a wealth of different life experiences – offer lay feedback to researchers within the university as they develop their work.

My parents remained independent and physically active until the end. If I could help enthuse others to adopt the same approach to life I’d feel I was doing something worthwhile. And it certainly is a privilege that I have the opportunity to try.

They both remained as physically active as they were able to. That and a healthy diet were, I am sure, key factors in their dementia remaining mild and them being able to keep their independence. That is why I am so keen to see research into physical activity for people living with dementia.