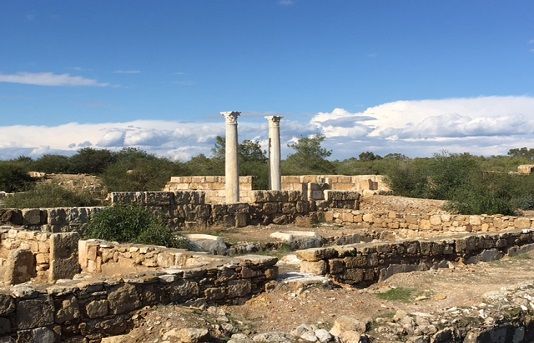 Heritage on the Move in North Cyprus

Most holiday visitors visiting Cyprus tend to stay in the Greek Cypriot Southern section of this beautiful island. However, its quieter less developed neighbour is also worth a visit. For the heritage traveller especially, the TRNC (The Turkish Republic of North Cyprus) contains some interesting historic sites including Bellapais Abbey, Kantara Castle, the Venetian harbour in Kyrenia and the old walled city of Famagusta. However, one essential visit for any heritage traveller is the ancient city of Salamis which lies just north of Famagusta on the new coastal road and north of the dividing border between North and South Cyprus.

Salamis was the original capital city of Cyprus and is said to have been established around 11 BC by the ancient Greeks. However, along with the rest of the island, this ancient city was occupied at various stages in history by the Assyrians, Venetians, Egyptians, Persians, and Romans and their combined influence on the building structure is clear to see. This city and port was also of major significance in the Mediterranean a short distance from Turkey and Syria and the major trading routes to the Near East.

The Roman ruins of Salamis are said to be one of the best archaeological sites on Cyprus. It is a fascinating place, without the crowds of tourists associated with the larger well known excavations such as Pompeii and Herculaneum.

Archaeological excavations at the site began in the late nineteenth century supported by the ‘Cyprus Exploration Fund’. Many of these finds are now in the British Museum in London.[1] Excavations restarted in 1954 and continued until the partition of Cyprus in 1974.[2]

The excavated site covers an area of one square mile extending along the sea shore, an easy place to walk around. There are extensive excavated ruins to see here including the remains of the columned gymnasium built in the reign of Augustus in (31BC -14AD) used as a training and exercise yard which is the centre piece of the site. This was clearly a rich city that enjoyed sport and recreation. The remains of swimming pools, hot and cold baths, saunas/sweating rooms and latrines feature on a grand scale for a small city. Headless ancient marble statues border paths. Complete sections of Roman roads crisscross the location.

One of the best preserved (and restored) buildings on this site is the amphitheatre with its tiered rows of stone seating, with its carved and decorated stone posts. The mosaic tiling is still a feature in many of the ancient rooms and on the floors of buildings including the ruins of a Byzantine church and Basilica. As you walk along the remains of the ancient 'streets' you can still see evidence of the 4th century earthquake that led to the destruction of the old city; tiny pieces of ancient terracotta roof tiles, mosaic tiles, fragments of amphora and marble litter the whole site.

There is undoubtedly something special about this place and it is easy to imagine how this city may have looked over 2,000 years ago.  Salamis is not Pompeii but it’s very accessible, perhaps too accessible. The guide books inform us that there is still a large area awaiting excavation under the sand and the pine and eucalyptus trees.[3] Hopefully, one day this will happen.

Despite the years of looting and the lack of archaeological investment, both monetary and the maintenance of heritage - the lost city of Salamis is a forgotten jewel of Cyprus.

Worth leaving your sunbed to visit!

[1] For information on the Cypriot antiquities held at the British Museum http://www.britishmuseum.org/research/publications/online_research_catalogues/ancient_cyprus_british_museum.aspx

[2] For further information on the division of Cyprus see https://www.theguardian.com/world/2014/jul/06/turkish-invasion-divided-cyprus-40-years-on-eyewitness-greek-cypriot-family