Heritage in our Cathedrals 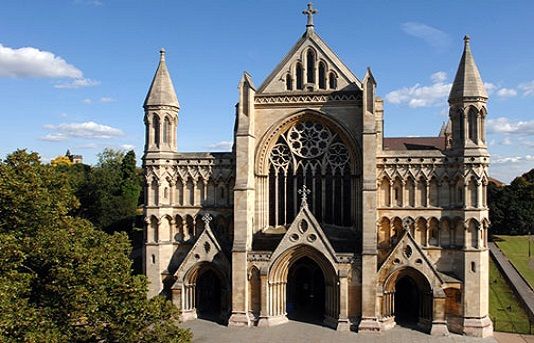 Ceremony and Pageantry A Shared Heritage

I’ve been at different events in three cathedrals this summer, and they presented three quite different heritage-based activities. The experience has got me thinking about what they had in common, and what they signify.

The first was at St Pauls, the centenary of the founding of the Order of the British Empire. The Queen and the Duke of Edinburgh were there, of course, and so were some of the more ‘peculiar’ parts of our pageantry – the Gentlemen at Arms, the Yeoman Warders of the Tower, the Clergy and many others, all forming a formidable procession which took a considerable time to pass down the aisle in a very well scripted ceremony to escort the Sovereign.

In the nave was a huge number of members of the Order from all over the Commonwealth, representing altogether a remarkable, perhaps unique, cross-section of the endeavours of people of many backgrounds and faiths mainly for the good of others. It was, of course, both a religious and a civic occasion, and although serious it presented several centuries of pageantry and the heritage embedded in it.

The second was at St Albans Abbey, for one of the graduation ceremonies of the University. This was quite different – a religious building used by a large and vigorous academic institution largely for its size and space but also, one hopes, for its solemnity and its serenity, to recognise the endeavours of so many people from all over the world, mainly young and at the start of their careers.

This too is redolent of pageantry, even though this University is only 25 years old: the graduates (and, separately, their families) in very traditional dress of gown, hood and mortar board in a style dating back centuries, and everyone smartly dressed for what is, after all, a special occasion marking the conclusion of a lot of effort. And here too was a procession, of the academic staff also dressed to honour the occasion, also in gowns and (usually) caps whose tradition dates back centuries; and then the formal presentation of the graduates to the Presiding Officer. This occasion was, of course, mainly a civic one – but it stands in a line of tradition going back four or five hundred years.

The third was at Westminster Cathedral, for the funeral of Cardinal Cormac Murphy O’Connor. This was an utterly different event – and yet it had features in common with both the others. A solemn High Mass celebrated by the present Cardinal was preceded and followed by another mighty procession of priests and ministers of many faiths, with bishops and archbishops from several countries and including the Anglican sees of both Canterbury and London. The nave was filled by lay representatives of the parishes of the see of Westminster, this time there not on their own account but to take part in and witness a religious ceremony which has changed very little for around a thousand years.

The point for me is that these quite different events, held in different buildings erected for the same basic purpose, each represent a part of our shared heritage. They reminded me that there is a strong cultural theme in these formal ceremonial occasions, many of which have strong roots in the distant past; and that they often take place in some of our oldest and most distinguished places.

Some might find them a bit silly. But the heritage lies not just in the building: whether we share the beliefs or culture of the occasion, it lies also in what goes on in them.