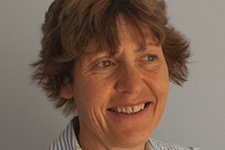 While undertaking her undergraduate degree in Mechanical Engineering at the University of Hertfordshire, Diana was working as an apprentice and designer for British Aerospace. During this period, she designed a novel cooling system for electronic equipment and filed a patent, later presented in Florida for BAe Dynamics. 'I've always had a passion for engineering; my interest has always swayed in developing smaller systems like microsystems, rather than large devices like aircraft design.'

Diana has gained a whole spectrum of skills. From her very first role, she quickly moved onto managing a team to being director and then Managing Director of her own company. Her expertise includes designing and developing sensor systems, system specifications and product development for medical devices, assessing new project requirements, writing technical articles and project management of small or large research and development projects.

'I studied for a PhD in Solid State Physics in conjunction with BAe. I've spent my whole career in industry and along the way I've obtained many awards, skills and patents and undertaken many advisory roles.

In Diana's current job, she is heavily involved in the development of the sensor based gait monitoring system.

'Over the last three years ETB has developed a range of motion-sensing systems for both the human and equine markets. I have led the R&D team through from concept design, prototyping and early development through to a commercial product. We have also developed our own in house embedded systems, signal processing and user interface software, to enable us to provide a complete solution for gait analysis. We launched our own gait monitoring product and this is now sold worldwide.'

To date, Diana has twenty-seven patents covering a range of sensor and system topics including an 'Electronic Nose', nerve stimulation and a solid state gyroscope.

It's clear that Diana has a lifelong passion for engineering and thoroughly enjoys what she's doing. With numerous amounts of successes, she continues to excel throughout her career. 'People assume that I know everything but I don't, I'm always learning something new and I'm forever asking questions.' The University of Hertfordshire recognised Diana's contribution to innovation and awarded her an Honorary Doctor of Science degree in 2005.

In Diana's experience, she hasn't met anyone who doesn't enjoy their job as an engineer, with numerous exciting opportunities that people can take. 'A degree in engineering provides you with the skills to develop new technologies and opens up a wide range of opportunities for the future.'

Go back to the Life after Herts section