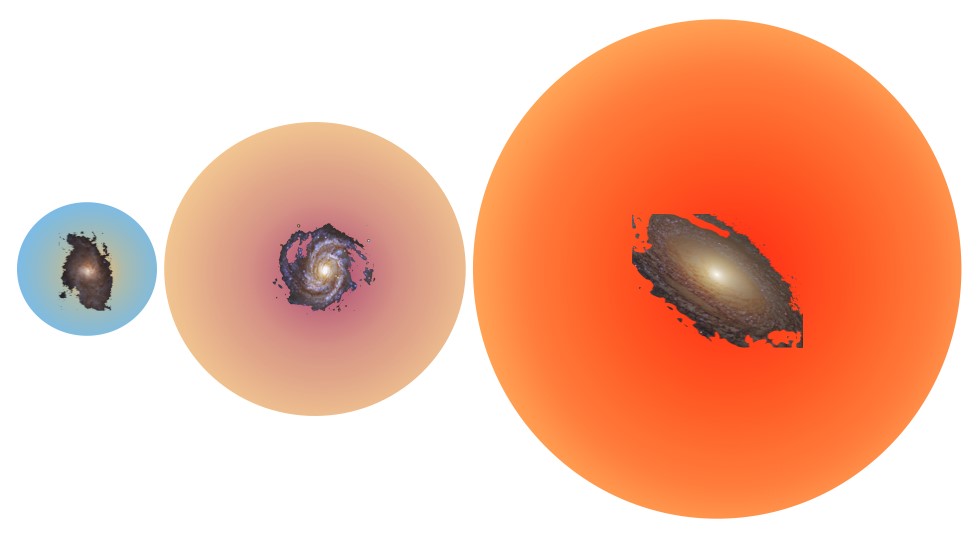 A new study by researchers at the University of Hertfordshire, published today in journal Astronomy and Astrophysics, has found evidence that the gaseous envelopes around larger galaxies are similar to the state of Earth’s atmosphere.

The study suggests that the gaseous envelopes around galaxies that are between a billion and a trillion times the mass of the Sun are in a state of hydrostatic equilibrium. This means these ‘envelopes’ are stable due the balance between the inward force of gravity and the outward pressure of the gas, which is very similar to the state of Earth’s atmosphere.

Galaxies are believed to be surrounded by very tenuous gas that hardly emits any light. Only in the most massive galaxies has any emission of this gas been detected so far. The researchers probed the nature of the gas envelopes by observing jets from the central black holes in the galaxies that light up at radio wavelengths, which are brighter if the density in the gaseous envelope is higher.

In particular, the team observed that the gas envelopes of galaxies become increasingly denser around a galaxy mass of 100 billion times the mass of the Sun, leading to a strong increase of radio luminosity for galaxies that exceed this mass.

The research data was gathered by the LOFAR radio telescope, which is one of the new generation of telescopes that is very sensitive and can see a large part of the sky at once.

The gas envelope of a galaxy is an important nexus for its evolution. The condensation of the gas envelope into the galaxy is what provides the material to form stars. Heavy elements produced in and ejected by stars in the galaxy diffuse through the gas envelope to enrich the intergalactic space further away from the galaxies. Hydrostatic gas halos slow down these processes and thus allow, for example, the Milky Way to form stars at a steady, relatively slow rate. These new results therefore provide important constraints for the evolution of galaxies.