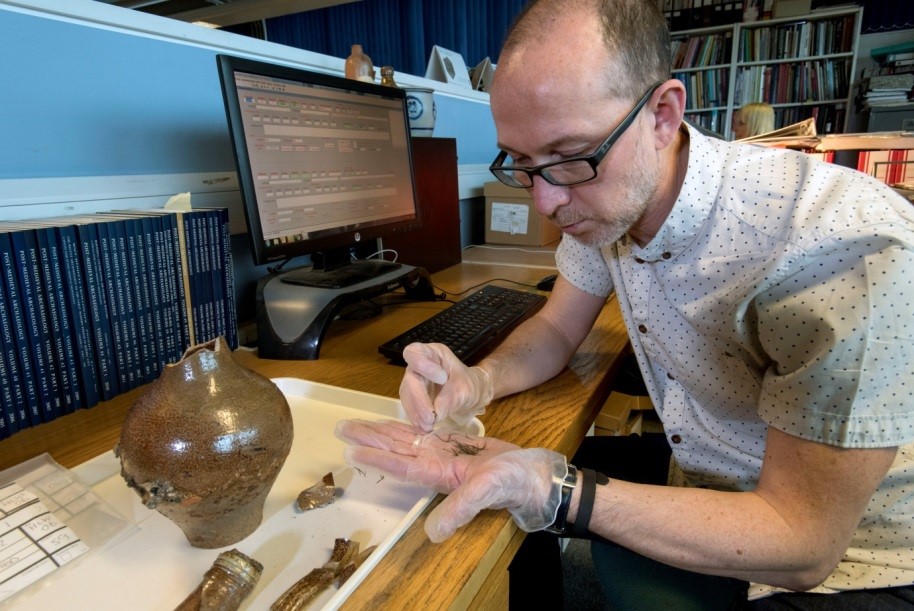 A team of archaeologists and historians from MOLA and the University of Hertfordshire are calling on people who may have discovered 17th century ‘witch bottles’ during restoration work or know of examples curated at their places of work, to come forward.

‘Witch bottles’ is the name given to 17th century stoneware and glass vessels believed to have served as objects for ritual protection or as the containers of a ‘prepared cure’ against witchcraft. Their contents most commonly include pins and nails, but sometimes also urine, nail clippings and thorns. They have been found deliberately concealed in a range of places: in hearths or beneath the floors of historic buildings, in churchyards, ditches and riverbanks, and on archaeological sites

MOLA Finds Specialist Nigel Jeffries, and Professor Owen Davies and Dr Ceri Houlbrook from the University of Hertfordshire are conducting the most comprehensive synthesis of evidence relating to the much practice mythologised phenomenon of ‘witch bottles’ ever undertaken. Led by Jeffries, ‘Bottles concealed and revealed’ is a three year project funded by the Arts and Humanities Research Council.

For the first time, all known examples that survive in museums and other collections around Southern and Eastern England (the apparent geographical extent of the phenomenon) are to be surveyed first-hand or through literature review and critiqued along with their contents. Extensive research will also be done to explore the origins of the practice and to situate ‘witch bottles’ in their full historic and cultural context, perhaps debunking some myths along the way.

The team asks that anyone who believes they may have found a ‘witch bottle’ to treat it as an archaeological artefact, not move it, and report it to their local Finds Liaison Officer (finds.org.uk/contacts) at the Portable Antiquities Scheme before notifying the ‘Bottles concealed team’ by: