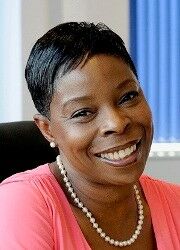 Grace has served as the Chief Crown Prosecutor (CCP) for the Crown Prosecution Service (CPS) West Midlands region since June 2014 - the first woman and the first Afro Caribbean to hold this post. She is ultimately responsible for all prosecution decisions and conduct of cases by CPS staff throughout the region. She has a personal involvement in many of those cases and on occasion meets victims of crime and/or their families to explain the decisions taken in cases that involve them.

Grace qualified as a solicitor in 1991 and originally joined a private firm of solicitors in High Wycombe practising criminal law. She joined the CPS as a Crown Prosecutor and held a number of positions in the service, which led to her ultimate appointment as Northamptonshire CCP in April 2005, making her the first African Caribbean to be appointed as a Chief Crown Prosecutor in the history of the CPS.

In April 2009 Grace was appointed Legal Director for North Region, CPS London, before becoming Deputy Chief Crown Prosecutor for all of the London Districts. In 2012, she became the CCP for the East of England region (incorporating Essex, Suffolk, Norfolk and Cambridgeshire Police forces).

Grace has made a significant contribution to the CPS Equality and Diversity agenda and was previously the Chair of the National Black Crown Prosecution Association (NBCPA). She has a national profile within the CPS, which includes membership of strategic boards dealing with issues affecting the service across England and Wales. She has been appointed as the CPS' first Community Engagement and Inclusion Champion.

In December 2020, Grace was appointed Director of Legal Services for the CPS and is due to start her new post in April 2021.

Grace has been included in the 2017, 2018, 2019 and 2020 Power List, which features 100 of the UK’s most influential men and women of African, African Caribbean and African American heritage.